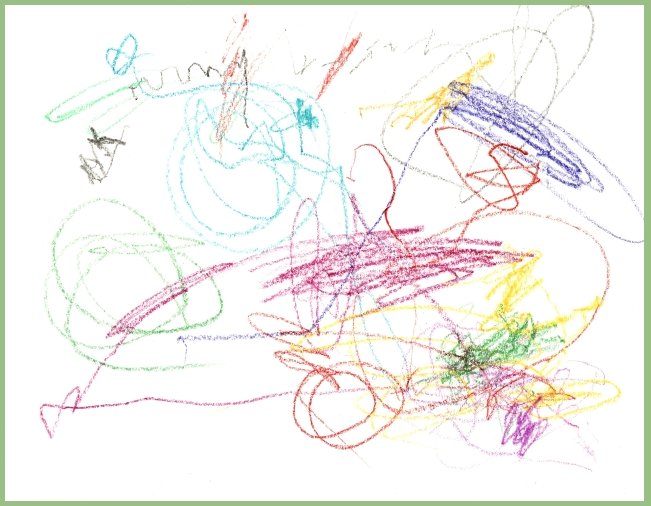 Amie drew this yesterday.Â Look at those eye-catchingÂ lines, whorls and scribbles! The explosion of colors! The harmony between the minuscule and the grand!

What I want to do here

Aren’t I a proud Mama! I can’t believe I am posting my daughter’s drawings. But I am hoping that it is in keeping with the aims of this website, which is

Or, to put it the other way around, to give an example

And what better example is available to me than my own child, my own parenting?

A child among many other children

Amie drawings, for instance.Â I sometimes find myself scouring the internet, looking for drawings by other 18/19/20-month-olds. I am a regular at Maisy’s Funclub Gallery, where I spend hours studying the colorings of other children Amie’s age.

It’s not because I feel that my child is in competition with other children, and I don’t even do (a lot of) comparing. I have always tried toÂ keep considersations of whether sheÂ is “advanced” orÂ “behind” at bay – what can it mean, anyway, to be advanced at 20 months of age?

But I do want to see my child as a child among many others. She hasÂ a place in a community of children. And I want to get to know that community. To that effect I “check them out”.

I’m an academic and the kind of person whoÂ seeks out research on whatever it is that I am doing, and on what Amie is doing. TheÂ fascinating development of Amie’s language(s), for instance, has prompted me to investigate language development in children generally. I am sure there are parents out there who would like to know what is going on when their kid’s vocabulary suddenly explodes, or when they start saying things like “I am clean up-ing!”

The way I see it, I have the timeÂ and the resources to investigate these issues, and I do so anyway, so why notÂ share them likewise curious, but time-strapped parents?

So, soon to come (in order of likely appearance -Â I sort of lied (to myself) about havingÂ the time):