While in Kolkata, I got hooked on birds again. It happens at times, especially in Spring. It stands to reason that I should be a birdwatcher: I love quietly observing, recording in notebooks, classifying. I love birds – of all the animals, I think they are the most wonderful. I have several bird guidebooks to show for my interest, though no lifelists, and no real knowledge. The problem is that, once I’ve admired the cardinals, blue jays, mallards and American robins, I turn to the many sparrows and get frustrated.

In Kolkata, which most of you know as Calcutta, we stayed in a gated community in the middle of the city yet curiously quiet and lush with plantings. Our building stood on the edge of a small copse of trees and shrubs, and we stayed on the fourth floor. From the balcony I spotted many (to me) exotic birds, so colorful that it was easy for me to identify them.

Amie at 2 years and 3 months was still too young to observe birds for more than a minute. She still had (and has) some trouble following their rapid movements. But she appreciated what came to be called, over the ten days of our stay there, “Amie’s Little Bird”.

She became more familiar with the bird in her grandparents’ Swiss cuckoo-clock. I am ashamed to admit, that I failed to observe this bird closely and that therefore I cannot identify it, though it did visit faithfully every hour on the hour.

One day I was spotting birds on the balcony while Amie was inside painting. I heard Amie’s Little Bird before I saw it: I recognized its chew chew. Suddenly there it was, not 10 yards away on a dead branch right at my eye level. I grabbed my digital camera. 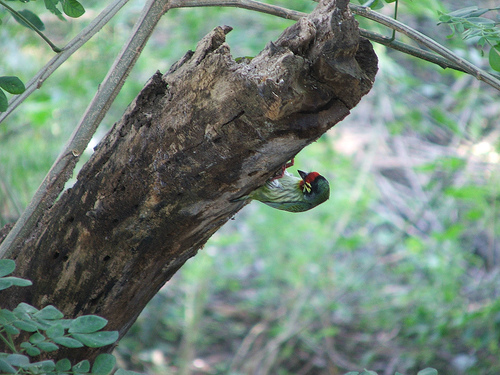 When I came into the living room to announce my good luck – I hadn’t yet had the opportunity to identify the bird and this still image would definitely help – Amie had painted the following: 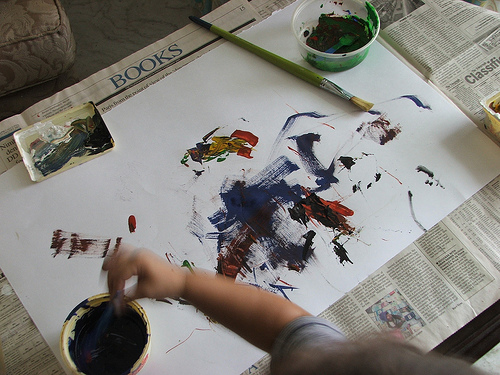 Amie’s Little Bird! Can you see it, hovering above the cuckoo-clock?

She had no help beyond some verbal guidance from her Baba, who only asked her where the bird’s legs and wings should go.

Later I risked my neck crossing Park Street in the evening rush hour (those of you who have been to Kolkata know what that means!) to reach the Oxford Bookstore, where I bought Salim Ali’s The Book of Indian Birds. Amie’s Little Bird was easy to find, on Plate 40. It is a Coppersmith or Crimson-Breasted Barbet (Megalaima haemacephala).