Amie took special care with this one: it’s for a friend who is ill.

We talked in advance about the plan to put two figures on the page, and how it would be best to turn the page horizontally (landscape) so they would fit. She began with the head of the left figure, taking care to place it sufficiently to the left so there would be room for the other figure. She also spontaneously drew the head up on the page, but I don’t know if she was aware of the fact that it wouldn’t have to lie on its side that way.

To my surprise, she gave the first figure ears. She also suggested she give it hands, only she seemed at a loss as to where to put them. I helped by saying: “Look, Amie, where is my hand? At the end of my arm, yes?” And she got it right away, even glancing over at my arm and hand again to make draw the other hand. Same with the feet.  She got the hands and feet right straight away on the drawing to the right. Their mouths are still hovering underneath their chins, which we think is supercool. 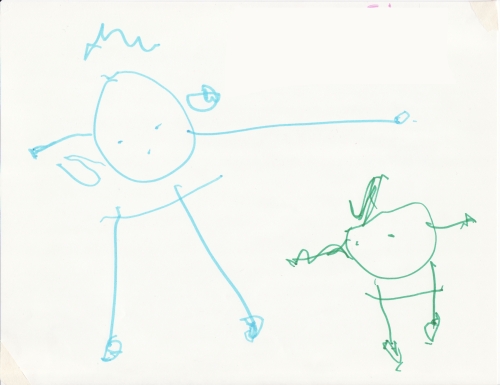