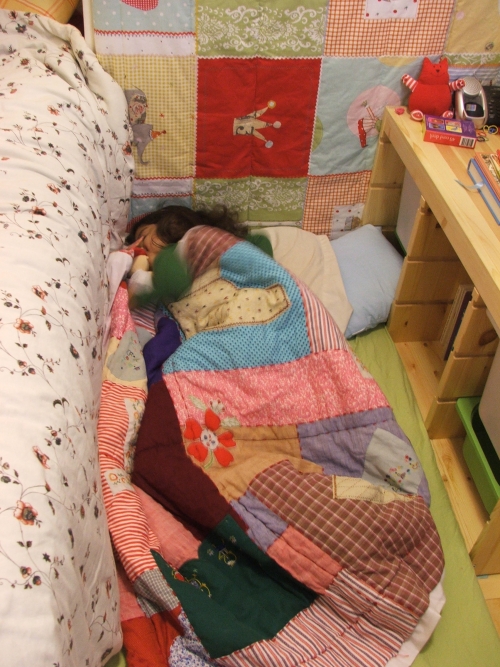 Back in October last year, when we got Her Own Little Bed for Amie, I told myself in my blog entry about it that I should write about co-sleeping, quickly, “now that it’s over”.

I needn’t have worried. Amie did sleep through the night in it a couple of times, but it was more usual for her to wake up around midnight and climb into the Big Bed “right next door”. When she is ill we co-sleep exclusively, as she won’t even consider Her Own Little Bed, and on our recent trip to Singapore and India we co-slept throughout. Also her Thamm (Baba’s mom) got to enjoy a nap with her (can you spot her?)!

After weeks of jetlag and yet another cold, we reintroduced Her Own Little Bed, but we haven’t been able to reignite that love-at-first-sight enthusiasm – neither hers nor ours.

We all like sharing the Big Bed. Amie sleeps more and better there. As for us, it’s true, we sleep less, but we sleep better.

We discussed Amie’s sleeping arrangements before she was born. Our space is cramped, especially our bedroom. But putting her in another room was out of the question, especially since I wanted us to nurse. We had a co-sleeper (a crib that attaches, flush, to our bed) all set up, but bed-sharing was still under discussion.

DH was all for it. It was what he was used to: he co-slept with his parents until he was seven, and he has seen all the other Indian families do the same. But in my Belgian culture, co-sleeping isn’t self-evident at all. In fact, it’s considered weird (hippie-weird) and impractical. An aunt exclaimed: “Don’t do that, she’ll be in your bed forever!” My younger sister (whose eldest was 8 already) just laughed.

None of the Europeans I discussed this with were concerned with the baby’s health, which is what seems to be the big worry here in the States. The concern was more with the parents getting enough sleep and issues of privacy for both the parents and the child.

Believe me, those were also on my mind. I am a very, very light sleeper – the kind of sleeper who needs to stuff a ticking wristwatch under a couple of pillows. I was warned (not sufficiently) about the sleep-deprivation of new moms. Sleep was very important to me.

Then I spent two sleepless nights giving birth to Amie! She came into the Big Bed the day she was born: even in the hospital she refused to sleep in that drafty and bright plastic box. Who wouldn’t! We soon realized our nights would be sleepless anyway, and that keeping her in the bed with us would be the easiest, for all of us.

At first I had to get up every three hours to nurse, and then she was right there – on my most exhausted nights I even dozed off while we nursed. She often slept on top of us: being so close to our heartbeats soothed her. Daytime naps she took in little sleeping nests on the sofa, or – when we had the time to take a nap too – on top of us.

(The second pictures was almost made famous when the Belgian Public News wanted to use it as the anchor’s background for a report on “fathers as primary caregivers”! It is so typical: the laptop, the baby!)

When she got bigger, she napped in the Big Bed. We brought that down by putting the mattress straight on the ground, and we put a lot of pillows around her so she wouldn’t roll off.

After we switched to one nursing a night, and even after she began sleeping through the night (only after her first birthday), she stayed in our bed.

I admit there have been nights when I cursed the arrangement – when she kept me awake for hours, content with that half-sleep during which she could continue to nurse, or simply fidgety. All in all we make two attempts to change the situation. We tried one of these contraptions:

It kept her in the bed between us, but created some “privacy”. But she was already to big for it, and kept waking up whenever she bumped against the wall. We discontinued it after three days.

We also tried to put the co-sleeper in use – up till then it was a glorified changing pad:

But she was waking up twice as much, and after several even more sleepless nights, we packed it up.

She still wakes me up: she rotates, fidgets, snores when she has a cold and kicks me in the face once in a while. I’m still as light a sleeper as I used to be, but now it takes me a second to go back to sleep after rearranging her little body.

And having that little body so close to me at night is very special, for her and me. There is instant comfort after nightmares and in times of physical discomfort. Throughout there is physical closeness that fosters emotional closeness, for the one awake and watching, and, I firmly believe, for the one asleep, warm and cozy in the nest.

I can report one drawback: Amie can’t fall asleep by herself, for nap nor night. We need to stay with her – lie next to her, holding her – until her eyelashes are on her cheeks and she takes that one very deep and wet sigh. Then we can slip away to go on with our afternoon or evening. And sometimes it takes her a long time to get to sleep – 1 to 2 hours, especially at night. I suspect that her incapability to fall asleep on her own has to do with the co-sleeping. I doubt however that her taking so long has anything to do with it. We hope that as she becomes more open to rational suggestion and peer-pressure, she will understand that she needs to learn that skill as well.

Is co-sleeping good for the parents? It depends on the parents. Is it good for the child? Opinions vary. There seems to be no conclusive evidence of danger to the baby, but there is plenty of unwarranted and misleading propaganda! Potential health-issues aside, it depends on the child. Some children do need that space to themselves. But as for Amie, I think it was and still is good for her.