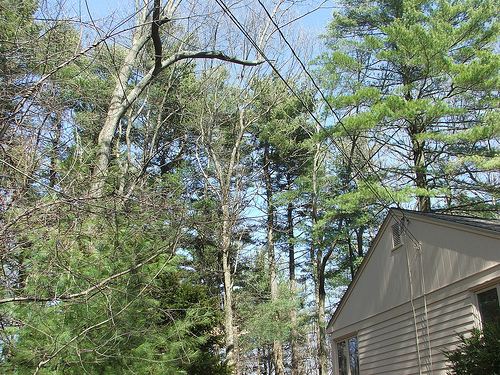 We closed yesterday. It was pouring outside. The lawyers and the agents sat with us at that big “conference table”: witnessing. At the end we made out a check to the seller for the leftover oil in the tank: $1600! How ironic. We are planing all kinds of alternative energy sources to avoid oil consumption, but apparently it comes with the house! Let’s just say that, once we’re done with our work, that amount of oil will have to last us two if not three years.

Then we drove to our house, opened our door with our key, and turned on the water. Played with the taps – it was a way of appropriating it, of making it “appropriate”: our own. We walked through, chatting, noticing new things, planning. We kept an eye on the time, the $15/hour for the babysitter time…

We finally felt how exhausted we were, from the stress of this whirlwind, needlessly complicated buying process, as well as from the bug that Amie brought home several weeks ago. She’s still fighting it, but is frustrated by the cough that wrecks her sleep. I “adopted” it a week ago, and DH was coming down with right at that moment.

It was strange, finally leaving the house, knowing that it will be two weeks before we return. This week is crazy busy at DH’s job and next week we’re off to Toronto for nine days. Then we’ll begin. Then… Seems like we’ve been waiting (postponing?) for decades.

The novel is on hold while I recover and while Amie is home from daycare for the second week in a row. I am so close. I almost finished chapter 13, after which I was going to send it out to my trial readers. That’ll have to wait as well.

But we’re not waiting, really, are we. We’re planning, dreaming, knowing, now, that it won’t be long.