(Two entries in one day, for a change!)

Today dawned gray but then the skies cleared up again by noon and by 2 Amie and I and our drawing materials were on our way to Drumlin Farm. In the car we discussed how we love Fall – though Amie avows she loves all the seasons – because of these bright blue blustery skies, the colors in the waving trees, the whirl of falling leaves, and the fresh air.

At the Farm we spent our usual 15 minutes on the observation platform along the Bee Line Trail, waiting for the deer to show themselves. Amie is pretty good at keeping quiet, as long as she has a snack.Â  Then we saw the first deer, whom we call “Bambi’s mother”, lying in the grass, munching. I drew her in my journal while Amie finished her snack.

Amie was very intrigued by that, so when we spotted “Bambi” (a younger deer, probably also female but never mind), it was her turn to draw from life. 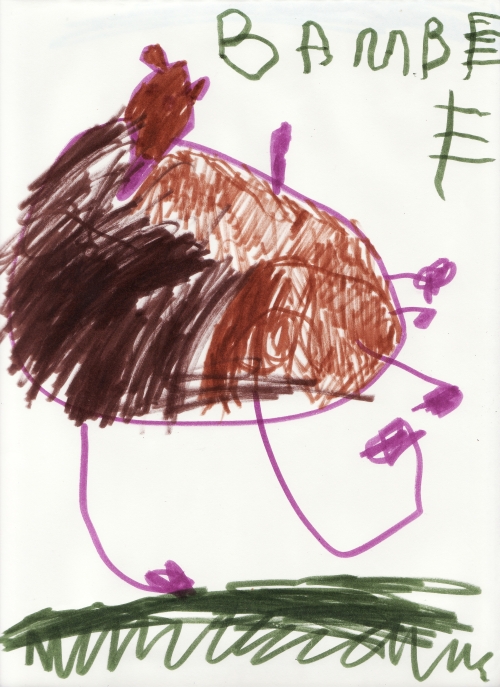 – “Bambi has an extra leg on his back, so he can run, like this” (does funny rolling run).

The addition of grass was her own idea, based on the grass in my drawing. It’s more or less the first time she adds context to a drawing. When I asked her a couple of days ago where Amie was,in the drawing, she said: “Here!” and slapped the page. Where else! Later she reconsidered and said that Amie was in the [living] room but you can’t see the toys because they’re in their boxes. 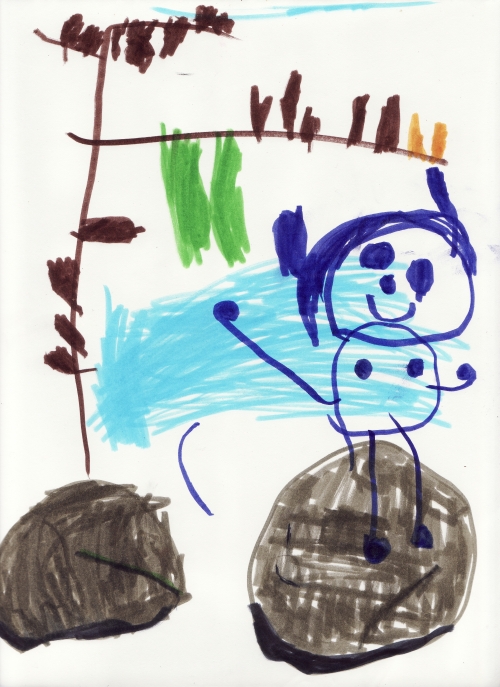 The two dots on Amie’s body are buttons (they started out as eyes but were quickly renamed buttons when she saw that was the body). There are the two boulders (I helped a little with coloring them in), a tree with green, brown and yellow leaves, and the sky. She had some trouble deciding where to draw the sky. Here the context was drawn first and the human figure was added last.