Why do I even look at the news – my “consumption” of which is out of spiritual necessity minimized to reading the headlines in Google News? 8-year-old boy shoots himself in the head at a firearms expo, 7-year-old boy kidnapped then shot to death, Neo-Nazi plot to assassinate Obama.

The places where my jawbone fits in its sockets floods with hot anger. My spirit rebels against the hard and cold instances of brutal despair for the individuals and their loved ones, but my mind quickly makes a getaway into the general meaning of such instances. We are supposed to have biophilia, an affinity for the earth, for rivers, for other creatures, for life.

Quickly put on some Bach, open again David Orr’s Earth in Mind on the environment and education – book seem so innocent compare dot the internet, but that’s a illusion – with Amie on my lap “fishing” while she sings about the Whoop-Dee-Dooper Bounce. From the corner of my eye I also stalk the new bird that has been frequenting our feeders, the Red-Bellied Woodpecker. I’ve been wowed by its red hood, its novelty and most of all, I admit, its rarity here in the North-East. I feel shamefully proud that it is here with us and to make things worse I’m intent on stealing its soul with my camera. Why this need to possess its image? Well, here it is anyway:

I also “caught” the Carolina Wren, who has been around all this time, but whose presence at the feeder is new. Here’s the bird in its box: 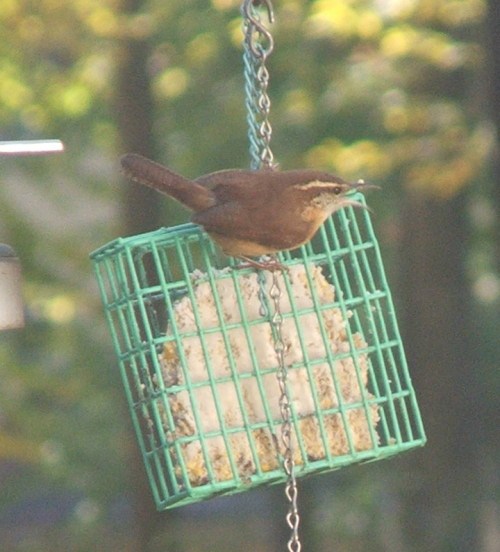 I am well aware that the presence of a lens between myself and these birds only distances us further, and that that is an arrogant statement. “Us”, as if the bird cares about how distant I am (as long as it’s at least ten feet). “Further”, as if I can ever bridge even those ten feet. And as if I could feed wildness so I could take a picture for a reward.

Why wasn’t it enough to just see it? The same with the book.Â  I often find my character has been ruined by my education in general but especially by academics and my “specilisation” in philosophy. It is addicted to sentences and abstractions andÂ  incapable of spontaneously undergoing awe and joy at a natural instance. Such moments of simply being-in-the-moment are too rare, such moments like yesterday, when I cleaned out some of our gutters and marveled at how this wet black soil came to be in them, ten feet away from the ground. Then I thought it’s not soil but decayed leaves and pine needles, and then but that’s what soil is and I nearly fall off the ladder.

Back in the living room I read Orr quoting Aldo Leopold (A Sand County Almanac):

One of the penalties of an ecological eduction is that one lives alone in a world of wounds.

I write “for Amie” in the margin (it is something I need to equip her for), close the book and plot the making of bread and this entry.