The theme of last Winter Wednesday was snow and well, no shortage of snow around here: a whole lot fell last night and more is on the way.

I requested the book, Discover Nature in Winter, from the interlibrary loan, but it hasn’t arrived yet. But Barb mentioned the following experiment: melt and filter different kinds of snow (new and old), then look at the particles left behind, through a magnifying glass or a microscope.

We were in luck today: the snow that fell was the fluffiest I’ve seen so far – it was a joy to shovel. I scooped some up into a glass, taking care to compress it as little as possible. Then I filled up another glass with some old snow that was underneath – the difference between the two layers was very pronounced. That made two glasses of snow: 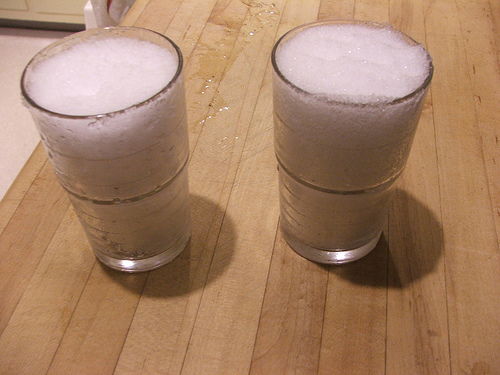 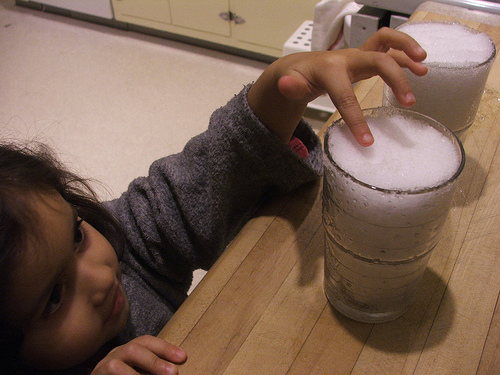 – What are you doing?

Strange, the new snow was very easy to push down. Its volume was reduced drastically. Not so the old snow. So we got to talk about “compact” and “dense” again. The new snow was very soft and fluffy. That meant there were many air pockets or empty spaces in between the snowflakes or ice crystals, lots of air that was were squeezed out as Amie packed it down.  The snow crystals in the old snow were already packed much closer together, with less air or empty space between them, so it was harder, much less easy to compact even more.

– So (I asked Amie when she had packed both glasses as much as her little fists could stand), is there as much snow in one as in the other?

– But, remember, at the beginning they were as full, no?

I have to laugh at this point. Really I’m not going to pretend that my 3-and-a-half-year-old gets all of this! She just likes playing with the snow. But she did listen, and we did continue our explanations, because we want her to get an idea of this experiment, and of how important and fun it is to experiment, and of how much we value her opinion and think she is capable of understanding.

But nothing explains it like a picture, and she and I sat down to make one. 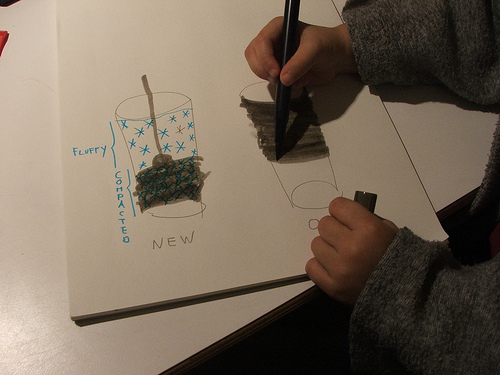 We returned to our melting snow throughout the evening – Amie often pulling on my sleeve to drag me over. Very soon it was obvious that the new snow was melting much, much faster. 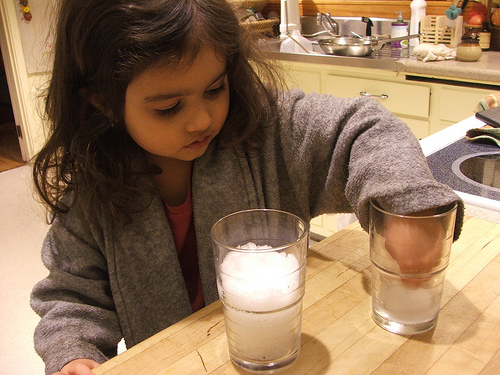 Why would that be? There had been much less snow to begin with. And even after compacting there had probably been a lot of air in it still, which warmed up and melted the snow from within. By 7:14 the new snow had all melted. But the other glass was still half full: 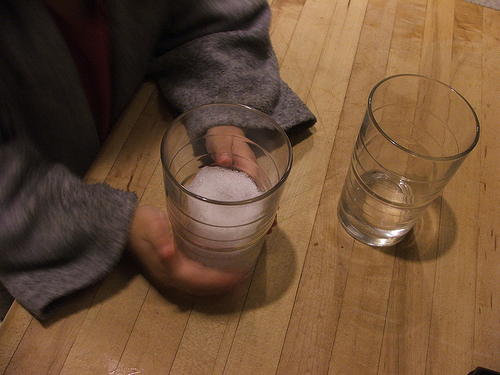 By 9:30 that the old snow too had melted. By then Amie had gone to sleep. I kept the two glasses, with saucers on them, in the kitchen for her to see in the morning. So… to be continued!