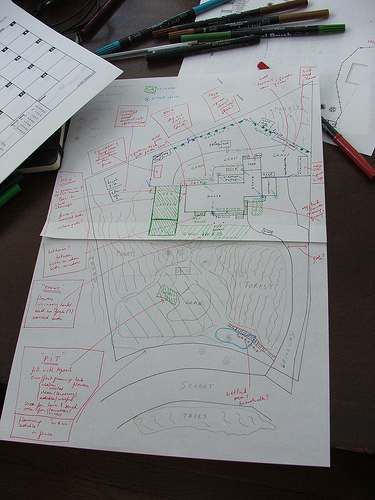 I am having fun with the garden plan. There are so many possibilities, so much to do! I’m cautious about planning too much. I want to concentrate on the food growing areas first: the veg garden, herb garden and some container gardening, and perhaps some berry bushes around the perimeter.

But we need to address those areas where the vegetation was ripped out and where the topsoil was dug under during last year’s new septic system installation. The soil there is terrible, and weeds are all that grows there. The largest of these areas is on a slight slope, so it is especially erosion-prone.

I just want to sow something there that is cheap and temporary, something we will replace with more permanent plantings in a year or two years’ time. A green manure would be optimal, as it would enrich the soil for the later plantings, but I was also thinking of some easy herbs and/or flowers. Whatever it is, it needs to:

I also got our potato seed and onion set order in at Fedco’s Moose Tubers. Finally and not a moment too soon: they already sold out of many of the organic varieties. I ordered:

Bintje is the classic deep-frying potato. It is very desired as a “friet patat” in Belgium, though it is rarely sold in supermarkets anymore. And that’s where people now get their food usually. I ordered two and lots of the late varieties – and good keepers too – because I always crave potatoes in winter.