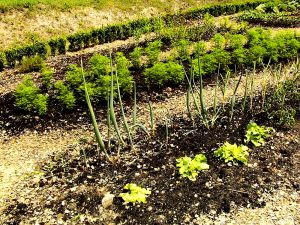 Kitchen Gardeners International has an interesting article on the worth of a home garden. The author, Roger Doiron, weighed the food coming out of his 1600 square feet garden in Maine (zone 5b/6) and calculated how much this food would have cost had he bought it in a conventional grocery store, a farmer’s market, or a place like Whole Foods. The numbers came to $2196.50, $2431.15, and $2548.93 respectively. More generalized figures are $60,000 per acre, or $1.50 per square foot.

Mmmm… My motivation for starting our own vegetable garden has always been a mix of self-sufficiency (out of principle as well as in case TSHTF), health (physical and mental), and the health of the planet (eating as locally as possible). My great hope is to eventually feed my family all the necessary vegetables, herbs and fruits during the growing season, eggs most of the year, and some of these outside the growing season through canning, freezing and root-cellaring.

In financial terms this means I wouldn’t have to purchase these foods at the grocery store, and thus that we would save that money. On top of that (I hope) we would also take out in food what we put into the soil, seed and water in dollars.

This article, then, is good news.Â  Let’s assume we can do as good a job as Roger Doiron and have (as we have planned) a larger garden. Let’s guestimate that at present (in our current “frugal mode”) we spend only about $70 a week on veggies, herbs, fruits and eggs (say around $3700 a year). Then we can break even on the dollar investment and pay off our initial investments (*) sooner than I had thought. Then after that we can eat better, cheaper, and more.

Of course we don’t need to eat more. So to me that “more” translates into “more people”. With the extra we can help out others, like at the food pantry around the corner that’s in trouble, or the elderly and financially troubled families in our community, or the schools that might welcome fresh produce.

So I’ve joined the Hen and Harvest Garden Challenge, to give at least one tenth of your produce to some worthy cause.Â  This year being our first we might not make that, but it’s the goal I’m aiming for. And I know: I haven’t one carrot, one lettuce even to show for it yet. And I’m not particularly known for my green thumb (ha!). But you’ll see! We’re going to make it work.