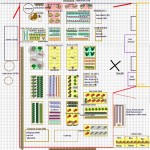 I wasn’t getting to the actual design of the garden: it was too intimidating, all those elements, heights and widths and soil types! Then I found GrowVeg, and I signed up for a trial membership. I like it a lot, it makes designing the garden quite easy.

I have a couple of suggestions for them:

Still, it finally got me going. In fact, I’m having way too much fun! This is what I have so far (click on image for larger): 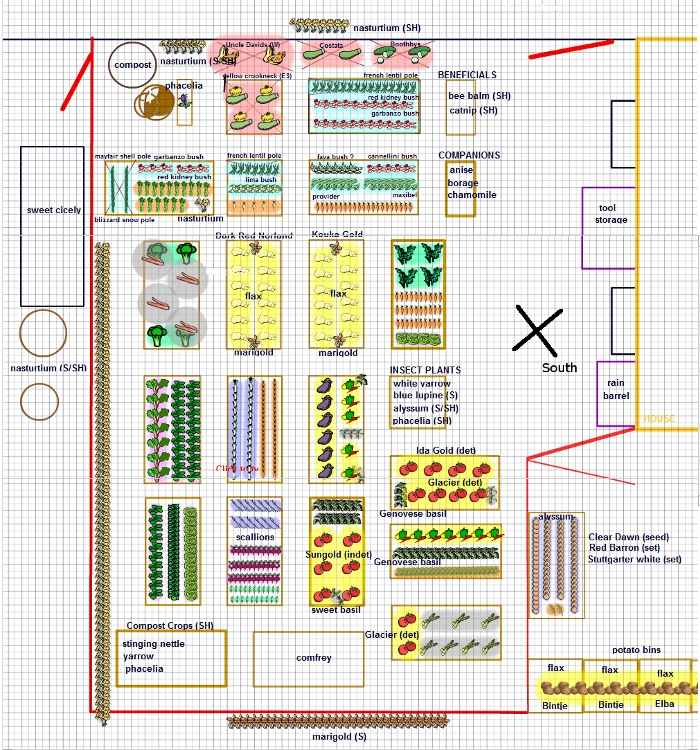 Yes, those are potato bins in the lower right-hand corner: 4 of them, for late varieties. 2 more potato beds for earlies. Lots of tomatoes and dry beans. The herb garden is in front of the house, not in this picture. 2 beds for lettuce and spinach, and 2 for compost crops. Lots of beneficials and companion plants tucked in. The rhubarb probably won’t get enough sun there. The onions I placed outside the fence, figuring none of the wildlife will want to eat them…

I probably need to fiddle around some more, especially with the orientation of the beds. I also think I put too many beds into the space we have.Â  Is 2 feet between beds (4 x 8) enough? I don’t think I could get a wheelbarrow through. I also need to check for incompatibles in the same bed. And I need to ponder on crop rotation… Any comments and advice is welcome and needed!

I increasingly find myself wishing for more sun. We have 2 mature oaks, 2 beeches and 2 pines closing in around and above the garden. We’ll get some good morning sun and noon sun, but the afternoon will be cut short quickly. I filled the prime sunny locations most sun-loving plants (tomatoes, peppers, basil and potatoes), but we’ll see how they (and the rest) perform. And even if they do well, I’ll be in trouble next year, when I want to rotate the crop.

We’ve been trying not to think of cutting down some of those trees, but reading Edible Forest Gardens has – seemingly paradoxically – convinced me that it would not be a bad thing. First of all, we have many, many pines, oaks and beeches elsewhere on our property, and throughout the whole neighborhood. Secondly, the oaks are in bad shape, and one of the beeches was badly nicked during the construction of the septic system. Thirdly,Â  replacing these canopy trees with many varieties of dwarf and semi-dwarf fruit trees and berry bushes would amount to replacing a mono-cultureÂ  with a much more complex poly-culture. It would be good for the veg garden as well as for the diversity of the garden as a whole, as such a variety will be more useful for us as well as for birds, insects, and other wildlife.

But having such massive trees cut down will costs lots of money. We’d demand they leave the wood here, of course, though we still don’t have a wood stove, or even a saw (chain or otherwise) that can handle that kind of girth… all of which also cost money. More for our wish list!

In the nearer future, the Fedco Moose Tubers seed potatoes and onion sets will be arriving soon – I hope not this weekend, though, as it will freeze around here.