A few weeks ago I used up all my compost. I had two full Earth Machines and one pile overflowing its chicken wire container. Not all of this compost was done yet, but after mixing it all up and adding straw, it was just the right mix of finished and unfinished for my purposes: mulching the unused beds for winter. 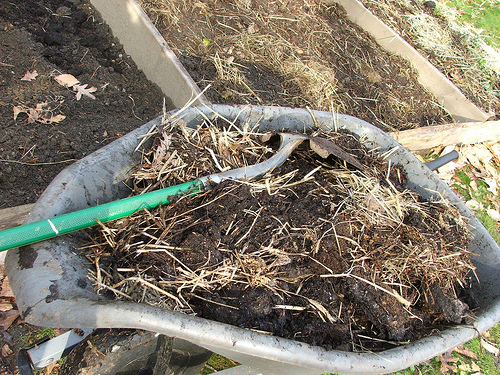 The Earth Machine closest to the kitchen door is the one that receives all our kitchen scraps. It was thus the one that held the most nutritionally balanced compost. This bin had been turned and fired up several times, so it was also the most done. Also qua composition it was the most varied:

75 degrees is the perfect temperature for vermiculture, and for sure, this top layer was riddled with thousands upon thousands of Red Wigglers (Eisenia fetida).Â  These worms do not live in soil and many people have to buy them by the pound. I did not buy mine and I have no idea how they got to be there, but they are welcome.

This is what the bin looked like when I opened it (picture from Wikipedia – I forgot to take one of my own):

It’s only when you hold in your hand a squirming ball of hundreds of worms that you realize that soil doesn’t “break down,” but that it is broken down. The realization is not simply grammatical. In all layers of compost macro and micro-organisms are busy breaking down the organic material:

All these organisms break the pile down into carbon dioxide, water and humus by using the nitrogen (N, greens, protein) in it to consume the carbon (C, browns, carbohydrates). I always imagine this process as an angry mob of angry villagers setting fire to the wooden house. Only they set the fire inside their guts. A mouthful of carbon, a nibble ofÂ  nitrogen (with an average C:N ratio of 30:1) and whoosh! The same happens when the larger organisms eat the smaller ones.

It is their body heat – the oxidation of the carbon – that the compost thermometer registers. The heat-lovers, burning the hottest and being the most numerous, consume the fastest. The Wigglers, who don’t like it above 80 F, take their time.

I was sad to have to break up this veritable worm bin. Some of them ended up in the beds and others I transferred to the new (uninsulated) bin, which will collect our kitchen scraps over the Winter and Spring. None of themÂ  will survive the cold temperatures, since unlike the earthworms they cannot migrate deep down into the ground when the surface starts freezing up. I hope they will as miraculously show up in my compost next year.