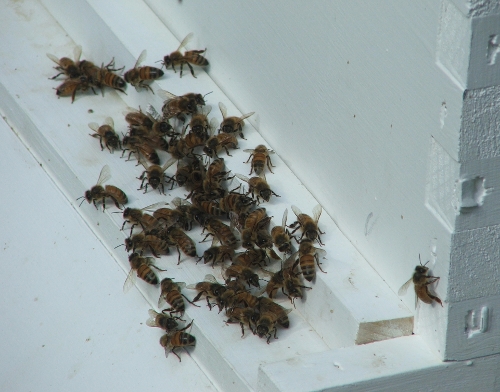 I’ve been watching the hive and there is not too much going that I can see: small scouting parties, hive entrance defense (photo), and the removal of dead bees. All the action is within (or so I hope). Because my hive is new and the frames have only foundation on them, the bees should be busy drawing out comb in which the queen can start laying and they can start storing nectar and pollen. Because they prioritize building, they aren’t flying out yet to forage. It’s for that reason that I provided them a frame feeder with 1 gallon of syrup (medicated) and a pollen patty. A hive loses about 30% of its population after installation of the package, because the new Queen isn’t laying yet.

I am so curious, but the advice is not to open the hive too much at the beginning. The first check we do is a quick one three days after installing, to see if the queen has been released from her cage and, if so, to remove said cage, and to check if there is still enough syrup in the frame feeder. That’s for tomorrow! 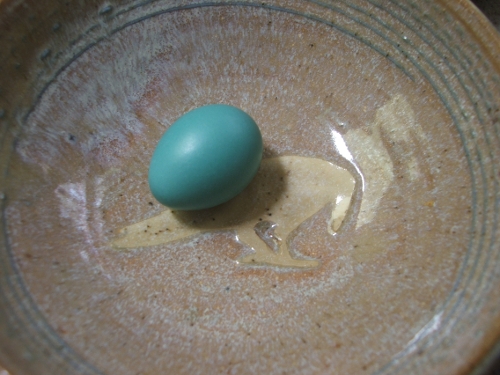 I noticed yesterday that the Robin was no longer visiting the nest in the bush near our mudroom door. A quick look confirmed our suspicions. The nest was empty. I found 3 of the 4 eggs on the ground. Did a predator get to it and shake them out? The nest looks intact. Did the parents abandon the nest because of all the traffic and push the eggs out (I find that unlikely).

I told Amie the news and she was not saddened, just inquisitive. Who might have done this? A raccoon, a cat? Are the chicks still alive? No. Can we open one? We did and found it was fertile (a small blob of blood). Can we hatch the other ones? No, they were all cracked anyway. Can we keep the egg shell? I’ll have investigate how to preserve an egg like this.