On this hot sunny day what did I do but seek out the two hottest areas of my garden.

First, the compost bins. They looked pretty tame, on the surface. Then I stuck in my fork and woosh, the temperature rise was immediately apparent.Â  IÂ  persisted, turning, consolidating and sifting out the finished stuff. I do the sifting by hand – wearing heavy-duty gardening gloves – pushing and rubbing the stuff through the wire mesh into the garden cart, then scooping up the bigger bits and throwing them into the next bin. I love the sensation of the heat. I realize this is soil in the making, imagine volcanoes, tectonic shifts, geological eras… 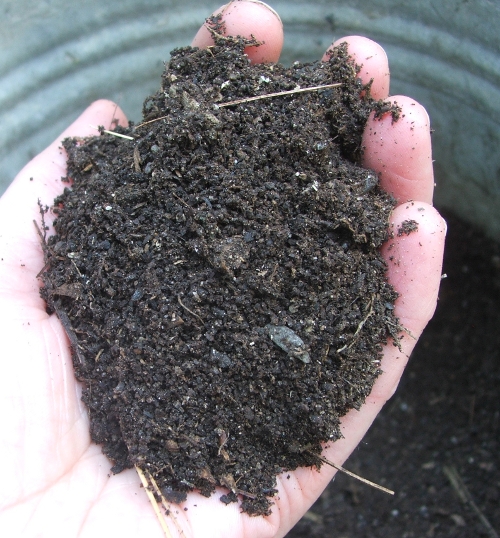 And it smells so good, like my mushroom bed, actually, with a fresh, nutty smell. Could it be mycelia? (UPDATE: See two days later.) It’s a distinctly, wholesome fungal smell. There weren’t many worms in it and was dominated instead by the tiny creatures that collectively look like a white powder.

The compost in the Earth Machines (EM) smells very differently. It’s always too wet and a bit anaerobic, especially at the bottom, giving it a sour, rotteny smell. Still, it’s always loaded with earth worms and other large crawlers. It composts much slower. That might be a function not so much of the enclosure but of the raw materials: kitchen scraps, including meat, fish, oil and dairy, versus pure plant material in the garden bins.

In any case, today was the first time I moved the half-finished, smelly stuff from the EM to the open bins in the garden. Let’s see if the rodents start mining it for half-decomposed bones. I will post our home-made compost bin plans and the pictures of its construction soon, because I am quite happy with it, except for one aspect that we can easily change.

As if I hadn’t sweated enough, I had to jump into the real sauna. I brought the finished compost, still warm, into the hoop house. It was a whopping 94 FÂ  (34 C) in there. I rigged up a fan to circulate the air a bit. The tomatoes, peppers, eggplants and Chinese Lanterns in there (the latter confined to pots) seem to love it. I weeded, top-dressed each plant with three generous handfuls of compost, then watered it in. A couple of hours later, I swear, they all looked even happier. 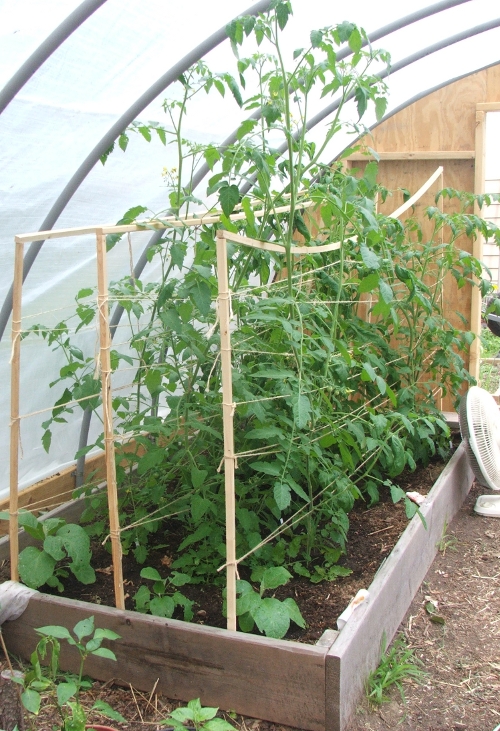 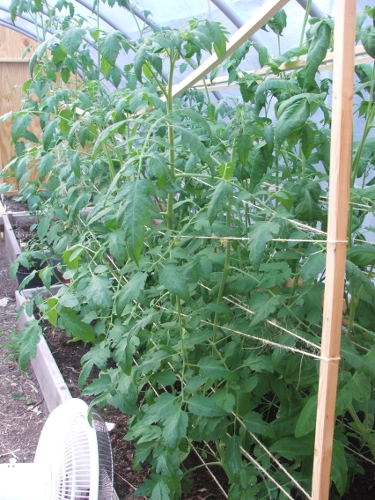 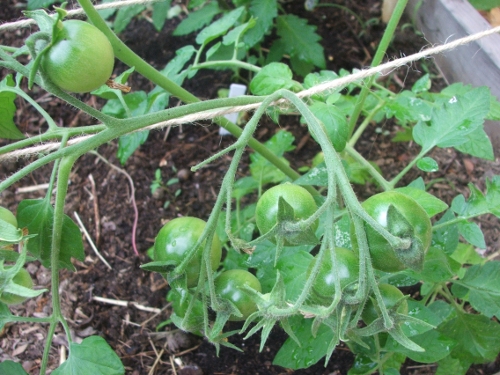 I used the rest of the compost on the berry bushes, then watered that in as well. They tend to get neglected a bit and I haven’t seen much growth since transplanting them. I don’t expect berries from them this year. I do from the strawberries up front, though. They have all had a chance to recuperate from being grazed by the bunnies/chipmunks, thanks to the netting I put over them. 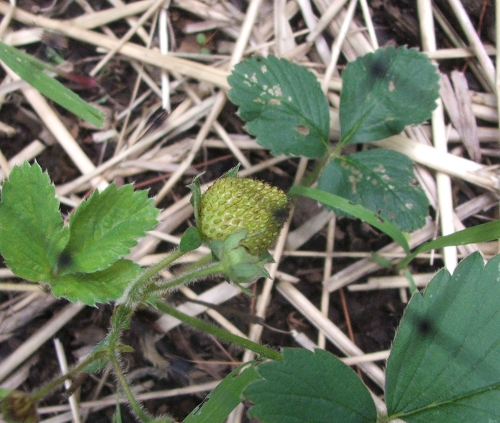 I hope to have more compost in a matter of days if I turn the new piles once a day.Â  Then the rest of the garden can partake of the black gold as well. Next up as well: trellising the tomatoes that are outside, as well as the beans.