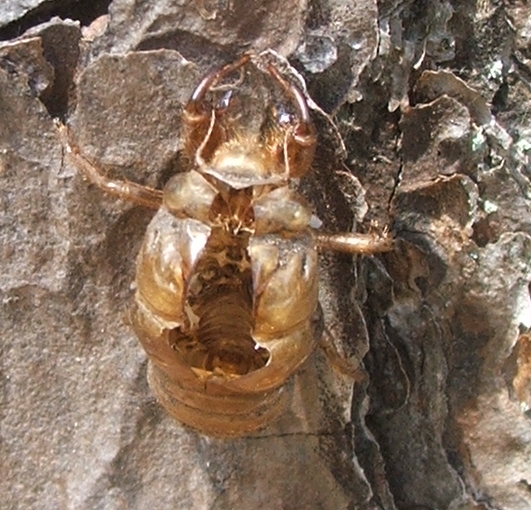 We’re back from a week at the Cape. We stayed in a little salt box cottage among the stunted pines, under the constant screep of the mating (and molting) cicadas. We saw the Perseids, built castles in the sand, went looking for beaches with waves not too intimidating for a four-year-old and a six-year-old. It was fun, especially since we had lots of friends unexpectedly staying for much longer than we had thought, and we even got to bring them home with us! It will make for an interesting Riot calculation. 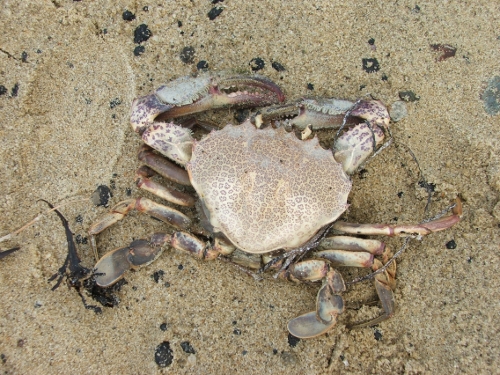 My highlight was that DH and I got to kayak from the far end of Swan Pond all the way to the ocean, and back again. It was my first “serious” kayak ride and I was fascinated with the ways of water. I had no idea a moving body of water could be so complex, so beautiful, and surprising… I had always wondered about those river passages in Jim Harrison’s books. Now I know the attraction.

But the garden suffered. My neighbor watered it and he went beyond the call of duty, but weeding and harvesting and the extremely hot and dry weather that week were not his responsibility, and I came home to a garden that is half dead. We should find some other time to go on a trip, next year. I remember experienced gardeners warning me, in books, in person, that a garden can be a heartbreak, and again I believe it.

But there are some bright spots. I harvested a zucchini as soon as I got home, at 1 lb. 7 oz., and we put it on the grill that evening. It was so creamy and flavorful, a real cheerer-upper. The zucchinis,Â  cucumbers and squashes are finally coming in, and that bed will be a good producer.

The critters seem to have retreated from the hoop house somewhat, perhaps due to the cayenne pepper I strewed all around. I have three brandywines still on the vine, very near completion, and I hope they’ll be allowed to ripen, just one or two more days. 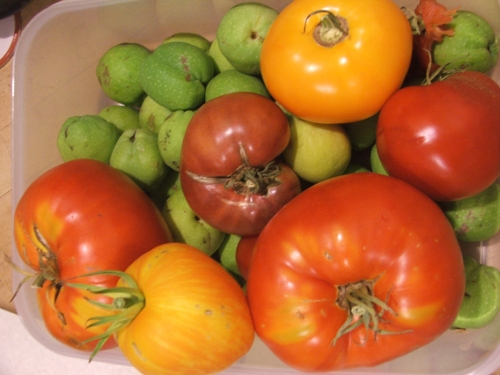 While I wait my friend gave me some of his own homegrown tomatoes (above).Â  He has some critters, but not nearly the plague I am dealing with. I hope he realizes how special his gift was, since, as he himself remarked, it shows that I could still have such an abundance, even if it’s not coming from my own garden.Â  How good it is to know this! It was a barter for my help with his growing dome experiment, and as such twice the treasure. Underneath the tomatoes there are quinces form his grandmother’s garden, and I hope to get two pints of jam out of them, and to give him half.

I hope to get some garden work done this week: pull all the finished dry bean plants (2 beds), all the dead lettuce (1 bed), and the bolted brassicas (1 1/2 beds). I’m putting in fast growing Fall crops, such as lettuce, spinach, and the slower growing hardy ones, like broccoli and kale. I also want to start canning, so I hope to score big at this Wednesday’s Farmers Market. It will pull me out of these garden blues. The blueberry jam I made last year was a big hit with friends, so I need to make twice as much this time. There will also be plums. And more tomatoes, of course.