When Tom (the hive inspector) pulled out one of the frames, he said it looked like perfectly good honey and I couldÂ  harvest it.There would be another flush of nectar at the end of summer, so whatever I took they would easily rebuild and refill.

So yesterdayÂ  I did just that.

The bees only got upset with me taking it when I started brushing off the 200 or so bees that were working on the frame. It was a quick jobÂ  and I walked away with a clear frame within minutes. The point, I’ve found, with beekeeping is to set your goal, to go in and act resolutely and confidently, and leave things in order. 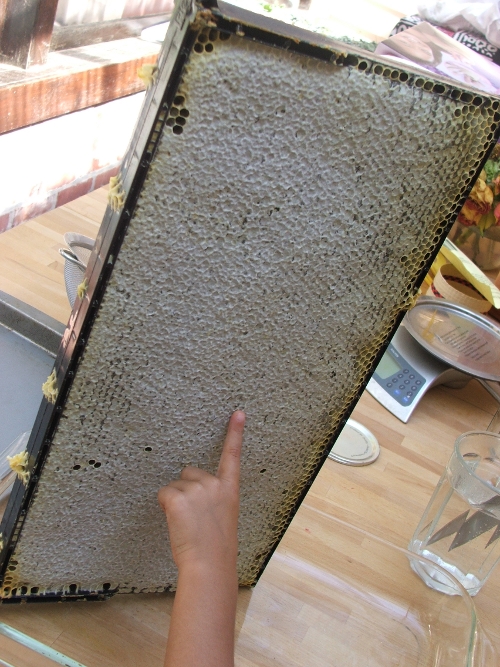 One side was entirely capped, the other had about 1/10 of uncapped honey on it. I harvested only the complete side – never harvest uncapped honey because the bees haven’t evaporated it enough and it will ferment your entire batch. 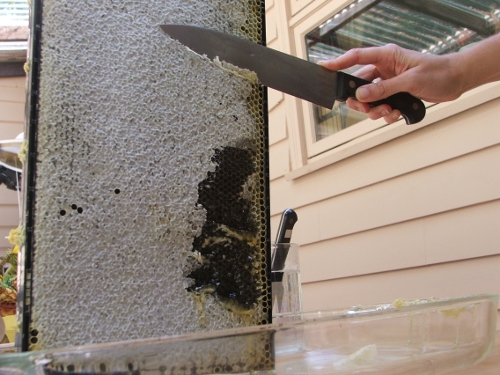 First I sliced/sawed) off the wax caps with a bread knife warmed in a glass of hot water (a serrated knife would have been better, in hindsight). I didn’t want to ruin the comb, so at first I set the frame at and angle and let it drip, but it was soon clear that I’d have to wait days to get enough honey out that way. During that time, the honey would soak up humidity from the air, making it unsuitable. 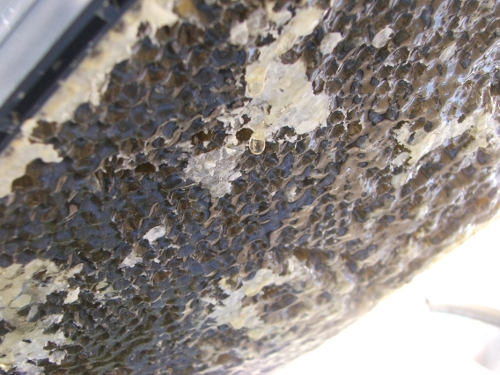 Letting go of my hopes to keep the comb intact, I pressed the comb with the back of a spoon. The wax of the cells is so fragile , it gave away almost immediately. I squeezed the honey out with the spoon, trying to keep as much wax out as possible. I transferred this honey into a fine mesh colander and let it drip through into a stainless steel pot. Then I scraped off the wax comb – I thought it would take the bees less time to rebuild it from scratch than to clean that mess and rebuild it. This mess still had a lot of honey in it, so I set that to drip in a different colander, for more immediate use, since it took longer to drip out than the first batch. 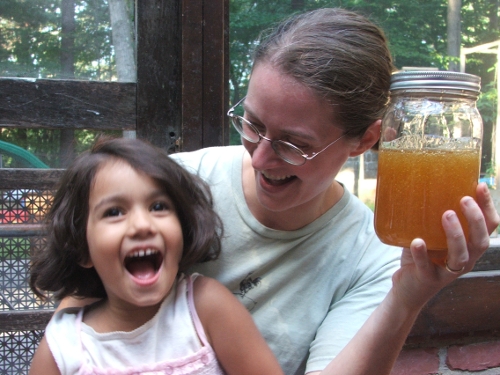 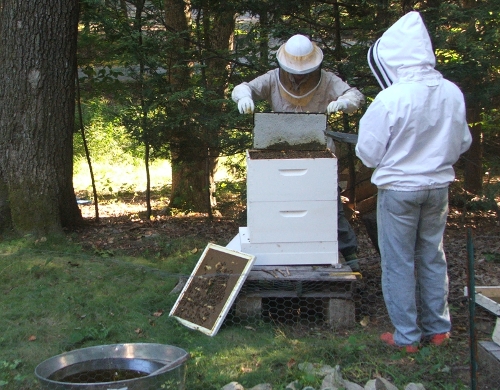 Then I returned the frame – the other sideÂ  completely untouched – to the hive. The bees weren’t happy but I came away with no injuries. My husband helped carry the tray with the frame. You have to be careful not to leave even one drop of honey on the outside of or anywhere near the hive, because this might attract other bees who will then rob the hive. This can seriously weaken even a strong colony. It’s a good thing I didn’t wait until today to return the frame because even after 4 hours the bees had already built a lot of bur comb and propolis into the gap.

It’s all for Amie – 1 teaspoon a day to combat her allergies – so I won’t be presenting friends and family with jars of liquid gold, yet. But, wow, 2 lbs off one side of a frame! A deep frame, to be sure, but still. When Tom said I could have 100 lbs next year, if all goes well, I was skeptical, but no longer.

How does it taste?