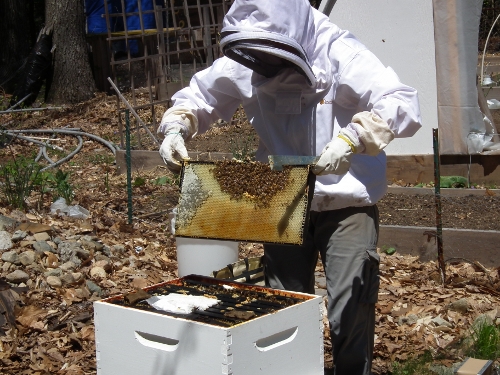 I got an email Sunday morning from a fellow beekeeper, letting me know his colony swarmed and would I like the swarm? Unfortunately I read the email too late, and by the time I called him someone else was already collecting the swarm. Bummer! But wow, was there ever excitement!

In any case, I called the collector to see if he wanter to sell it. A swarm like that is worth at least $50 – especially in a time when no more  packages are available. Again my call came too late: he had already installed it in his hive. But he did advise me to look again, and if it was clear there was a laying worker, I should still try to get a new queen  ($15) and see what happens.

So I went in again. Again I spotted the cells with several eggs, but also more capped brood, and not all of it drone brood! The cells for drones need to be larger, so the caps will bulge out more than the do for workers. The bees would not mistake a fertilized or female (worker) egg for a drone egg, so I was fairly certain there were fertilized eggs in there. And to confirm my hopeful suspicion, who comes crawling around the corner of the frame? 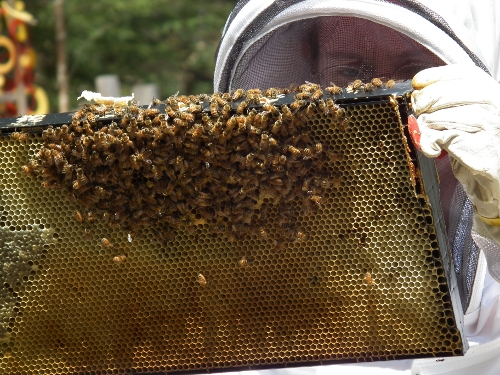 The old queen. The blue dot on her back is entirely faded, but I spotted her by her different color (she is browner, less hairy, shinier) and longer abdomen.

So… maybe there’s something wrong with her, but in that case the bees will take care of it. They’ll turn a female egg into a queen. I’ll keep an eye on queen cells, the old queen and her laying pattern. But for now… a big sigh of relief.

And in the meantime, more and more of our food is coming straight from the garden. Here are some raw materials: leeks and kale, and mache and claytonia for the salad. 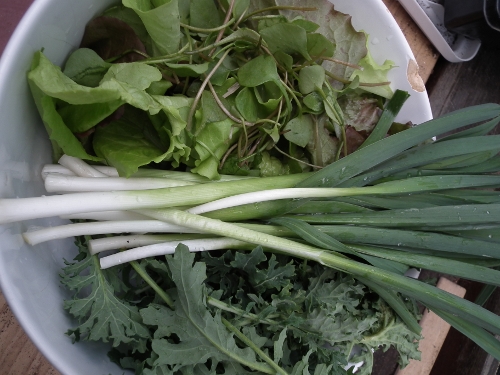