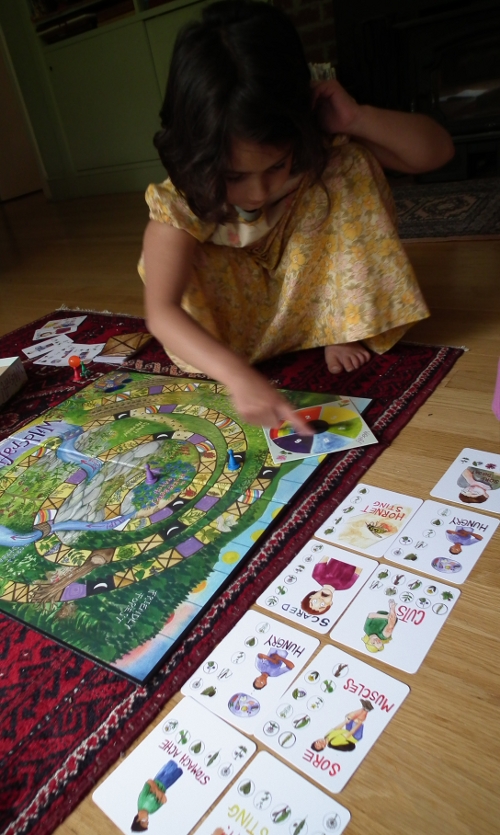 Last week I splurged on Wildcraft, a cooperative board game for kids (and adults) developed by HerbMentor, one of my favorite places for herbal instruction. The idea of the game is to make it up the mountain to the huckleberry patch, gather huckleberries, and make it back down again to grandma’s house before nightfall.Â And not to perish.

In the official game there’s not much chance of perishing. When you land on a cross you get a trouble card – a hornet sting, sore muscles, hunger, or stomach ache. But you start out with four remedy cards and gather lots along the way. It’s usually an easy walk. Usually.

Amie loved the game from the very first. She has played it several times, with us or by herself. She’ll skip around the house telling her doll they should find some Plantain for that bee sting, Echinacea for the sniffles. It’s sweet.

Then yesterday she came up with a variation. She set up the board and invited me to play, but wisely kept the rules to herself until I had committed (you spin that wheel, you’re committed). The variation was this: only trouble cards, no remedy cards.

Painful, to say the least! Our conversation ran thus:

– Well, you’re the one who invented this game.

She weighed Â ailments (diarrhea would be the worst one) and inflicted pain (gleefully handing out the cards) all in the playful and safe setting of a game. She also explored endurance and the extent to which the human body can handle pain and discomfort. At the end of the game, when we finally made it back to grandma’s house, Amie gathered she must be near death. Like so: 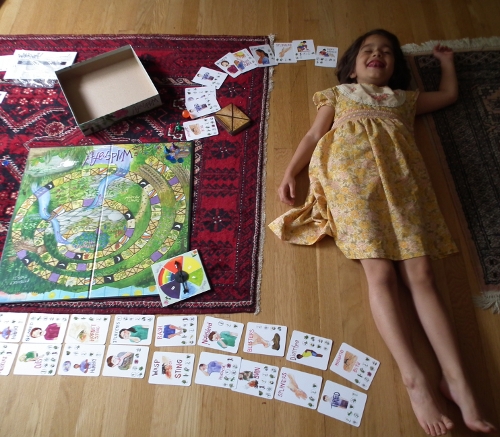 Notice the tongue sticking out, a sure sign of near death.

The cards near her head, by the way, were her trouble cards. The long line near her feet, those were mine! She invited me to come lie next to her and be really dead.

I declined, stating someone had to take the picture.