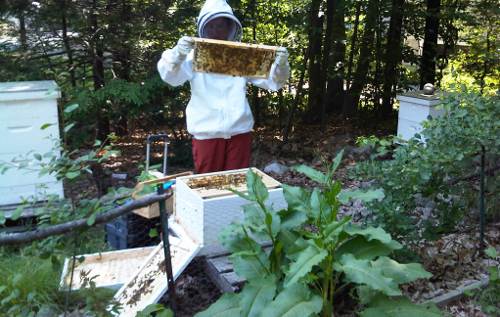 Last week Â I had the pleasure of watching our county’s bee inspector, Tom Stefanini, at work inspecting my hives.

In the big (swarmed)Â hive, which has about 50.000 bees now, he pulled out the thirteenth frame in a row and spotted her within a second: a beautiful new queen, which he said looked mated. No eggs yet, but I’ll check again later this week. Â The strong new package is doing well, the second deep already drawn out enough so that I can super it.

Then, as for my weak hive, Tom concurred with my suspicion that the queen that came with the package was no good: bad brood pattern, much less wax building than the other new package hive, which is doing wonderfully. Â He found the old queen and noticed how the bees weren’t attending to her: another bad sign. Then he said:

“Is that another queen?”

Sure enough, on the same frame, another queen, almost identical. This one was being attended to. The bees must have concurred with our assessment of the old queen and must have superseded her. But they kept her, and there she was, working side by side with her (mated?) daughter, laying eggs! Tom said this is something you rarely see. I wish we had taken a picture.Â I checked again yesterday and could no longer find the old queen, but there was lots of brood in all stages, in a good pattern.

So, in short, all three hives are doing well. The two that were in (perceived) trouble – the old swarmed one and the new weak one – took care of themselves without me having to shuffle frames around or kill off queens.

Tom is a fountain of knowledge and he shares it readily as he works. He works without gloves and with nimble fingers steals pollen from the bees carrying it in. They don’t even seem to notice it. He plucks it off them and eats it on the spot, and for some can even tell you which plant it came from.