I really wanted y’all to see this.Â This is a crazily drawn-out (filled with honey and capped) frame. Â Two things: the color and the shape.

Some of the comb is darker because the bees first used it for brood, and only after that did it became honey storage. The more comb is used, and especially when it is used for brood, the darker it gets as more junk is left behind on it. All the lighter colored comb around it was only used for honey storage.

Sometimes the honey is darker making the wax look darker too. Other dark spots may be cells filled with pollen.

This comb ripples and bulges because I probably didn’t push the frame tightly enough against the next frame. This violated the “bee space,” which is on average Â aroundÂ 5/16 or 3/8 of an inch. The bees will build excess comb in a space larger than that. If it’s not too much, they’ll make their comb a little deeper, making it uneven, like on parts of this frame. If there’s too much extra space, Â they’ll build a whole “new” wall of comb, like theÂ strip in the middle, which is actually mostly detached from the (plastic) foundation so it has cells on the back of it and the bees can crawl behind it: in effect, a “frame” on its own. 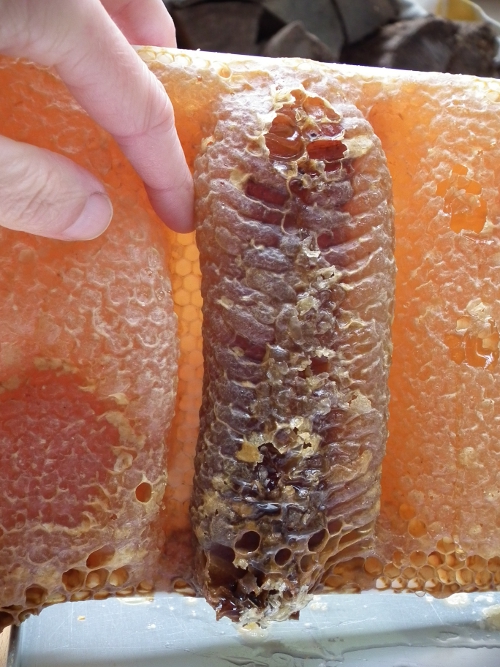