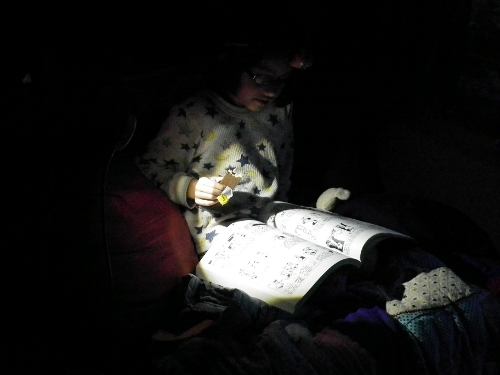 So we weathered yet another storm. Or rather, we didn’t. Sandy went around us. We got some of her peripheral gusts of wind and some rain, but none of it very severe.  Half of my town was out of power.  School was closed Monday and again today due to power outages and blocked roads.

So we got lucky. Or did we?

Our power went out at the very beginning, before Sandy had even made landfall 300 miles south of us. So just the smallest of what Sandy could throw at us instantly toppled our infrastructure. Why? Because  all she had to do was continue what Irene and previous storms had already wrought: trees and branches weakened by those storms had to come down.

The lesson here is that we don’t go from crisis to crisis, resetting each time. Instead we now accumulate risks and dangers. The next storm, however small, might be a major tipping point. The next big one might be utter disaster. Lacking the money or will to repair our infrastructure to pristine condition or to replace it with more resilient systems – systems that can take a hit – we “maintain” it in good enough condition for “normal” conditions.  The downed wires will be restrung, but we won’t be putting them underground. 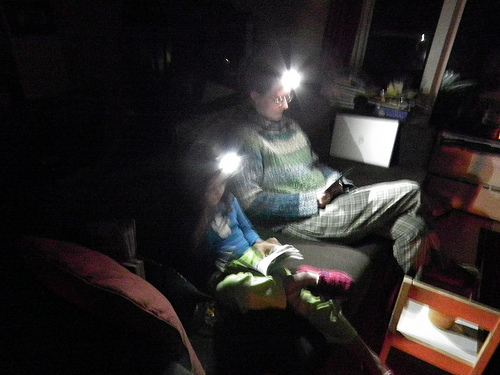 Here’s another example of our lack of resilience. When the grid went down, our grid-tied solar array went down with it. Batteries are still too expensive, environmentally problematic and short-lived, so my household was without power too. With Solarize Massachusetts we managed to get about 130 solar small residential and business arrays up here in Wayland and in our neighboring towns of Lincoln and Sudbury. We pat ourselves on the back for our success, yet in times of crisis it turns out that it means nothing.

The majority is not bothered, of course. “Those couple of days in the year when you’re without power don’t matter,” they scoff. To them it’s all about the 362  (give or take) good days of energy efficiency and environmental impacts. These are all good and necessary qualities, of course, but we should also be looking at resilience. Climate change and other predicaments will impact  us more and more, faster and faster. “Normal” will shrink and “Frankenstorms” will become the norm. All our efficiency won’t matter if there’s no resilience underlying it.

If you’re thinking that that’s rushing to ring the alarm bell, may I point out that only a few years ago people laughed at the possibility that whole swaths of the country might be without power for more than a couple of hours. “This is not a developing country!” Nowadays we easily skip worrying about the power, taking it for granted that it will be lost, and move on to worrying about the water supply. In a few years time, even loss of water supply will be expected. What’s next?

And so we go happily down the rabbit hole, adjusting our expectations with each step so that we don’t have to do something about it that may – sweet Gee!  – demand sacrifices to our wallets or our idea of ourselves as on top of the world!

For me this isn’t just a social – local or international – issue. I’m pointing the finger at myself too.

Yes, we’re prepared. We have bug-out bags at the ready and food, water, flashlights, batteries and sleeping bags (*) in a hurricane room in the basement. But let’s not kid myself! Yesterday, as DH was charging our brand-new NOAA  emergency radio, the hand crank broke off. I was furious: what if we had really needed it? Though I am still  fuming, I am grateful for the wake up call. There could have been no more powerful sign of how fragile we are, and only fractionally less fragile even with all our preparations.

That I believed that my radio would work also betrayed that I had not really given up a key assumption: that we are rebuilding this ship in dry dock rather than plugging her leaks in the middle of a choppy ocean. I thought I had:  it’s my favorite image of our world in peril, along with “we’re treading water,” which complements it. But obviously I had assumed that this radio was built in dry dock, that is, under the very best of circumstances and conditions. I know now that it was not, that it was made cheaply, its parts sourced and assembled by the cheapest bidder, its testing foregone because the buyer would buy it anyway and because, perhaps, most buyers wouldn’t need it, anyway.

Well, may we all shed our assumptions, and soon. Treading water is hazardous enough without live wires coming down!

(*) Some accuse us of being hoarders, but we bought our emergency supplies in times of plenty, when our purchases didn’t  impact supplies – which is not something you can say of those who raid the supermarket shelves the day before the storm.