It cannot wait to get started in the garden, in particular to start the big Soil and Water Works. I want to plant stakes and dig dirt and maneuver wheelbarrows and roll rotten logs downhill. I even want to roll some of them uphill, that’s how desperate I am to get started. For today I figured out how to tackle our slope. Not the bottom part of the pit (yet), but that will follow naturally once we get that slope under control.

The slope is too steep and was filled in with bad soil after septic works before we bought the house. Because it is too steep it erodes from the excess roof and hilltop run-off. This makes planting anything on it or adding good soil difficult. We terraced itÂ three years ago. But the “path” was too broad and, because unchanged, still too steep, so it kept on eroding. Because it is so steep it is hard to mow, and the weeds overtook what grass was not washed away. Result: the path is unused and the beds off to its sides are inaccessible and untended. 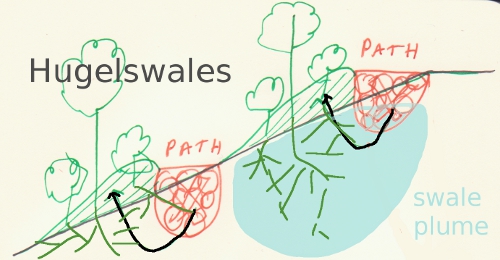 Hugelswales are on-contour swales filled with wood. The swales (trenches, ditches) intercept runoff and store it while releasing it to the soil underneath (video of a swale plume). If you fill them with scrap wood (of which we have a lot, in all stages of rot), turning them into a Hugelkultur, that wood will break down and the cellulose will create an even better sponge, releasing not just the water but also all the nutrients from the wood.Â Â It’s only strange to call this a Hugelkultur (“Hugel” means mound) if you can’t imagine the mound turned upside down.

The swale will be packed with wood too rotten to burn, twigs, and everything in between. Â While packing it in, we’ll fill in the gaps with wood chips, soil, compost, leaves and all the nitrogen rich stuff we can get our hands on (find some neighbor who mow their grass and don’t use chemicals). On top we’ll put wood chips that our neighbor is happy to supply us with. The swale will thus become an on-contour, level path, about three feet wide. As the wood breaks down these paths will settle and sink, so we’ll simply keep filling them with more woody debris.

The soil from these trenches will be moved downhill to form a small bump up, then a gentle slope down toward the next swale. I’m guessing these will come to about 5 to 7 feet in width. I might add a bit of wood at the bottom of these as well, but considering that we’ll eventually plant perennials here I wouldn’t want too much settling here since we won’t be able to keep topping it up. We might have to bring in soil for this, since we know the dirt on the slope is rocky and none too good, though the soil in the terraces should be in better shape by now.

This is a 2009 image. Some of the trees have been cut down in the meantime (marked by red X-s). Â I wish I were a little more savvy with the visuals, but you get the idea.

What to plant in this massive Hugelkultur? This will be a woodsy (carbon-rich, fungal, acidic) environment, so woody perennials is the way to go. A mix of blackberries, blueberries Â and elderberries in the top two beds and a mix of currants, gooseberries and elderberries in the bottom bed. These latter three are shallow rooted, a must because we’re close to the septic leach field at that point. And in between, some small fruit trees, perhaps? Most of these will be for 2014, however, since this system will need settling and the soil will need work. We’ll start with cover crops and woody mulches.

I can’t wait to build me an A-frame and get digging. It’s going to be -4 F tonight, though (-20 C), and all of the town’s Â ice skating rinks are in business, so I’ll bet the ground’s a bit too frozen right now. But this is what it looks like in Plangarden, which is very un-permaculture straight. 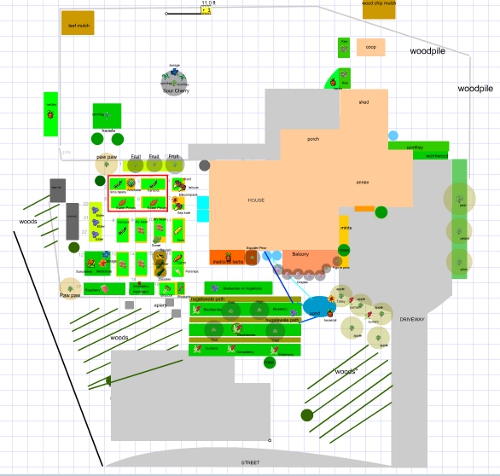