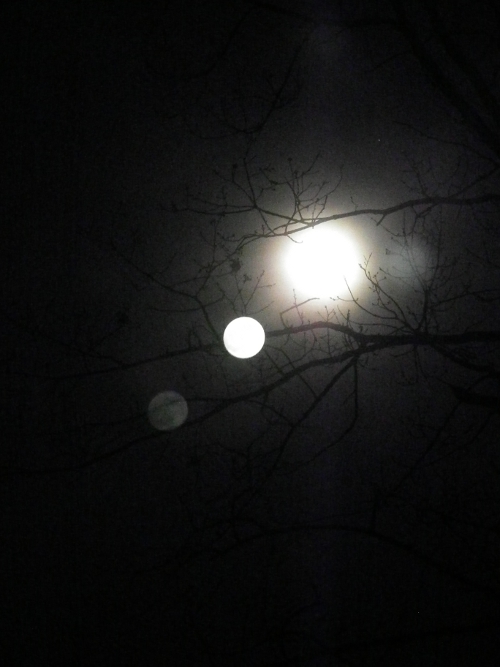 Though very tired I went on the Full Moon Walk yesterday evening, a lovely tradition or what we hope will become a tradition, when a group of us walks in the dark under the full moon, either quietly or in conversation. The clouds drifted apart enough to let the moonlight through only at the end of our walk, but before then the blanket of snow reflected enough of the residual sunlight and of course the human-made light for us to get by without flashlights, without breaking any ankles.

Walks like these tend to be spiritually “loaded” – sometimes in a funny, humorous way, sometimes a bit morose, most often both in rapid succession. When someone brought up the very real possibility that these open fields, which in season grow hay and bluebirds, would be turned into soccer fields (and parking lots, of course), we all rose up in protest, but then inevitably the conversation turned to the recent history of other such atrocities, and how it got to be that yet another atrocity, here, in this field, is legally, even culturally possible. Â No one went too deep into time, though – what atrocities lie thereÂ are too much. And someone said: “Well, that was a buzz kill!” and we laughed and enjoyed the walk – the enjoyment of the walk the very reason for, if need be, fighting for this field, and therefore, don’t get me wrong, a very worthwhile effort.

But it set the tone for me.

Geese started honking at each other in the dark distance, calling up that deeper time, and deeper still. How ancient are their species and their flyways and,Â glory,Â here I stand listening to them, in what is truly their field.Â FurtherÂ off wasÂ also the sound ofÂ the traffic on the road. I wondered out loud why there was so much lightÂ (the cloud cap was still tightly drawn) and why it was so orange/pink – but no, no one else would have it. Someone said it was the snow reflecting the light, believing, perhaps, that one being natural, so must the other.

I was not the only one, though, struggling with the contradiction. It ran through the hour. How ugly and artificial our world is, how nurturing is nature. Â Someone talked about dragon lines, which are alignments in landscapes. Are they natural, artificial? But the thread was never really taken up. It was – it was – too enjoyable to be there.

It wasn’t time for activism, for plotting how we would save this field, get others to walk it with us and get attached to it. What then, was I feeling that I could Â not let go?

I laughed with everyone when one of us, who was not looking down at the slushy/slippery treacherous ground while we were descending a slope, all strung-out, called moooo-OOOONÂ in a very wild and haunting way. We all stopped and looked up then and the ice floes in the sky broke up and there she was, thatÂ body. Others took up the call, but not the one dog present. I found I could laugh with them while the moon pulled at me. Like Josh Ritter writes,

and she ripped the grief right out of me.

Funny, I thought, that it would be the moon, that extra-terrestrial that is oblivious to, above our mayhem. Then I did a double-take. Of course, the moon too has seen our mayhem: we went there, too, planted a flag there. We just couldn’t resist.

And that that was a US flagÂ also mattered. I have been thinking of what it means that I immigrated to this country, that I live on and off the many takings and that I too am therefore a taker. I started reading about the indigenous people to learn what it is like for those living in a dying culture, to see it die. That was at first. I soon realized that by immigrating here, living here, calling this “my home”, I too am living on the corpse of that murdered culture.

I’ve been in that state, lately, of openness to whatever accusation the land will throw at me. If I call it home (whether rightfully or not), the land has the right to call me out.

But here now were the geese, calling me out, and the pink field, too. And now the moon as well!? I wondered, how do I even stand upright and laugh at the wild yell of Â these fellow human beings clad in Gore-Tex and Ray-Tech, and leather. How is this even possible? And then it hit me.

On the way back, five minutes to the parking lot (yes), I could no longer hold it back. I could typically not directly say what I was feeling (I hope that skill, too, I will learn), so I anounced my admiration forÂ Stephen Jenkinson and his observation that

“guilt is grief for amateurs.”

Well, that came out of nowhere for the friend to whom I had directed the pronouncement. She said, but let’s not dwell on guilt, and added that that’s what she likes about Transition, that it’s so positive. And I said, yes, guilt we mustÂ avoid, or work through, but grief… grief…Â I could not make myself understood, but she must have grasped some of it. She brought up the documentaryÂ Traces of the Trade, A Story from the Deep North, about a woman (the filmmaker) who realized that her ancestors were the largest slave-trading family in the US, and who set out to stare this atrocity in the face.

Well, had I not just had the Great Insight into grief-not–guilt, I would have stark fallen over, right there in the slush in front of everyone, and wailed. How had I left outÂ that atrocity? This land is piled with corpses…

I reeled but stood, quite speechless. My friend and I left it at that, an opening. I came home and after Amie was asleep I watched the trailer ofÂ Traces of the Trade and was in for another Â surprise. In that trailer,Â Katrina Browne, the filmmaker, says it, literally, exactly that: that once she looked, unflinching, at the atrocities and her and her family and the world’s role in it,

“it became natural to want to make things right, not out of personal guilt, but out of grief.”

I have to stop being an amateur and start the work, part of which may well be to teach the absolute necessity that we not mistake grief for guilt, that we must grieve because the situation is grievous, and that only then can we start theÂ work of making things right.