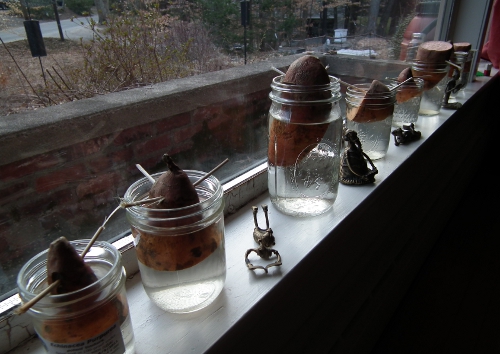 Spring mode! It was 72 degrees today and sunny with a light breeze. I was in the garden as much as possible these last two days.

I planted two paw paws in a corner of the garden that previously held a leaf pile. What gorgeous soil I found there! From now on: leaf piles all over the lace! I also moved two elderberries from the front, where they were being overwhelmed by undesired brambles. I sowed lupine (a legume, so a nitrogen fixer) all around the trees and the bushes, as well as borage. I also made a spot n the edge of the forest for stinging nettle.

I transplanted lots of strawberries which a friend had left over. Also brassicas (collards, broccoli, kale, brussels sprouts) in the rhubarb bed – I thought rhubarb  was indestructible but one of the two seems to have perished.  Amie and I transplanted lettuce, kale, chard and parsley into one 4×4′ bed and then I transplanted more kale, also radichetta, lettuce, mache, minutina and more parsley into a 4×8′ bed. All were covered with row cover to protect the little seedlings until they’re established.

And then there was consolidating compost piles, treating the berry bushes to some top dressed compost and moving leaves and sticks and leaves. Oh, and stones.

I did a hive inspection of the remaining colony and found the queen. She is looking great and doing well. There are lots of eggs and larva as well as capped brood, all in the right formation. The workers looked fat and healthy. I slid a sticky board underneath the screened bottom board and in three days will pull it to count the mite fall. Then I’ll know if I need to treat for mites or not.

The two tiny chicks are growing rapidly and getting louder too. No issues there, aside from the fact that one is still anonymous.

We’re looking at a couple of days of rain and a drop in temperatures, though apparently not below freezing. I’ll be sowing many more seeds for the lights in the basement, now that there is room again. And I’ll be admiring my line-up of sweet potatoes. Quite a sight on my windowsill!