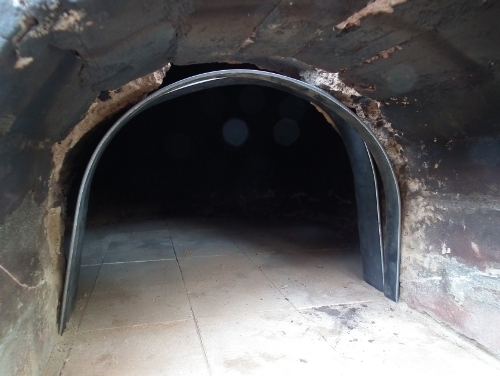 The oven mud could have been more clay-ey, but most of the oven has held up well. Not so the part that wasn’t as compacted (it being over the 0pening)  and that gets the most abuse, namely where the door, when fully closed (closing off the chimney) hits it.  It started crumbling.

DH bought some stainless steel bands at the local HD and bent them to the shape of the door. In the picture you can see that, with the door in place, substantial gaps had developed. With the bands in place, DH could fill them up.

Then we made pizza.

Still not trusting the heat retention capacity of the oven, and pushing up against dinner time, we opted not to stoke the fire for another hour and not to clear the burning coals out, but to instead move them to the back of the oven and to keep a little fire going there.

The first pizza puffed up the moment it hit the hearth (measured at 900 F), its cheese bubbled merrily, and it was done within four minutes.  The next one did well too, except that some of the newly added mud came down, adding some minerals to the pizza toppings.   Yum! 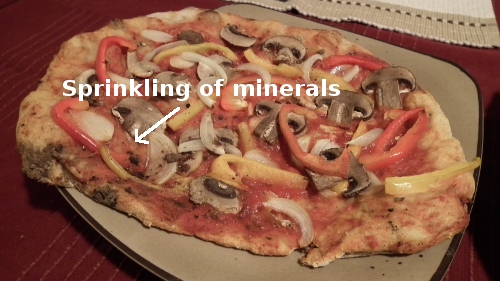 Unfortunately, because we had opted to keep the fire going, we couldn’t close the door and keep the heat in. Whenever we did, oxygen starvation made the fire die down and the oven filled with smoke. Mud is okay to eat, smoke not so much. The next pizza needed a little more time but came out well – only a larger chunk of oven mud came down. 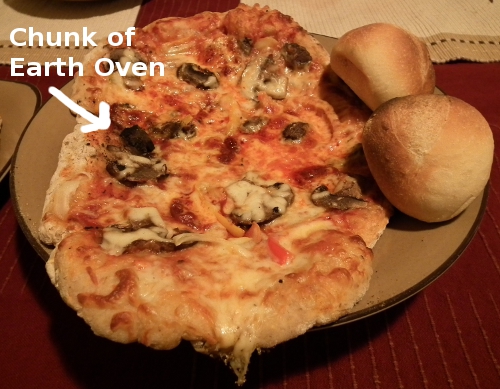 Still perfectly delicious. By the time the last one went in, a good half hour after starting, the oven had cooled too much (hearth at 350 F) and that pizza was hardly edible.

We checked on the opening and the gaps are still plugged, so the mud that came down must have stuck out and not had enough support to stay in place while wet and being heated so drastically.

{Update}: Kiko Denzer commented on this post with some great advice about the crumbling, the heat retention, and the best way to make pizza. I’ll just reproduce it here:

Hey, congratulations on the beautiful oven and pizza. You might try sweeping the oven dome to remove loose stuff before your next firing. Once you get rid of the worst of it, it should stop dropping (unless your mix was too low in clay). It also sounds like there may still be some moisture in the subfloor (quite possible, even likely if it didn’t get time to dry before you laid the hearth floor). If so, performance should improve dramatically when the last of the water finally gets driven out. When that happens, the standard method for pizza is not to clean out all the coals, but to maintain a small, bright fire in back, and to work with the door open. At typical pizza temps, you can expect them to cook in 1-2 minutes (assuming thin crust, light topping — official Italian pizza standards!) For all your other cooking adventures, see Richard Miscovich’s new book, From The Wood-Fired Oven. And good luck! Thanks for the good story…

I recommend that you watch his video on burning a clean, hot fire in the oven, here on his website. It’s good advice, not just for earth ovens but for wood stoves as well. I’m happy to say we do all he recommends, and better now than before now that I’ve got the hang of my splitting ax.