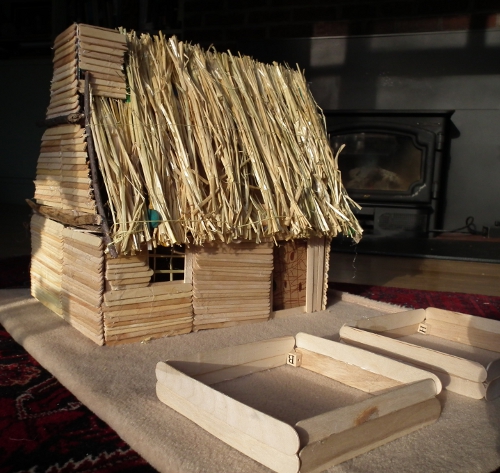 Glue gun where have you been all my life?!

Amie and I have been dreaming up a Tiny House. She would like a house of her own (she just skips the room of her own) and I am always looking for ways to populate the ole homestead in more comfortable ways. We often have lots of guests at the same time, and often guests for a long time as well (months)…

Recently we got the opportunity to think on our Little House a little. For school Amie had to build a model Pilgrim House, following up on their field trip to Plimoth Plantation. She had opted for building a Wanpanoag wetu, but too many students  in her class had done so, so the pilgrim house it was. 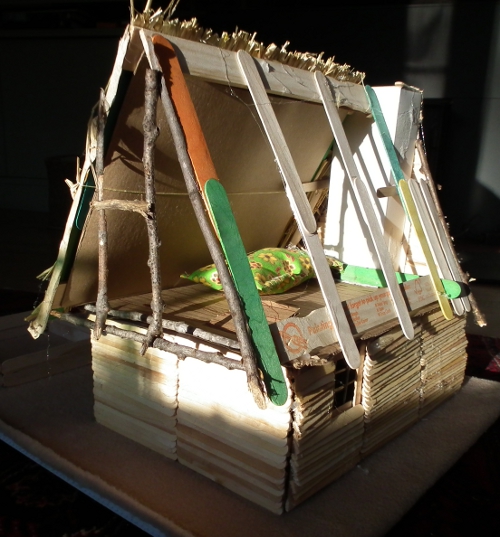 Since DH has been traveling, it was her and me and sometimes a friend in the same predicament. I’ve love every minute of it! It invited lots of interesting conversations. For instance, at first Amie and her friend kept stacking the popsicle sticks on top of each other, like they were building a European house, brick by brick. I kept reminding them of how houses are usually built in North-America, by framing with wood. Why would that be? Perhaps there were not enough trees in Europe? Then, once they figured out how to make sturdy and somewhat straight three-way corners (those lettered blocks in the garden beds), it was like they had just discovered the third dimension, and the houses soared.

Even the discovery of a detail, like how to place clapboards, was great. She was placing them, as she went up, one behind the one below it. I suggested we took a walk around our own house, and then she got it: if she placed them in front as she built up, they would shed the rains instead of funneling them inside. And where are the holes in a chimney so the smoke can escape? And why would the outside door close inward? We looked at our porch door, which is the only outside door that closes outwards, and she remembered immediately that that’s a problem in winter, when snow blocks the door.

We also discussed fences. In her memory of Plimoth she saw that the Wanpanoag village had no fences, not even around the garden, and that the Pilgrim village teemed with them – photos of the place confirmed this. This of course led to a conversation about the cultures behind that. And would she put plastic furniture in her house, or a little electric candle to simulate the fire? No, because they didn’t have those things yet… 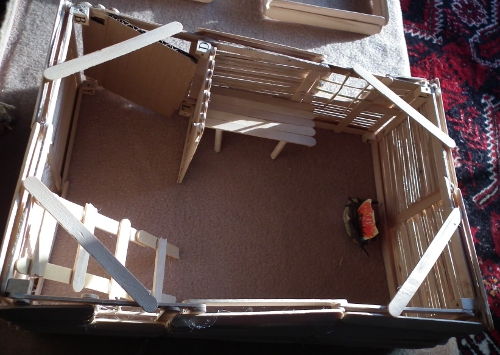 A wonderful project, with lots of time management and lessons on prioritizing and perseverance in the face of frustration and non-perfection. It made me wonder why the education at our elementary schools, here, is not more project-based. And then, I admit it, there were also Mama’s control issues. I never once said: “Hey, you’re doing that wrong!” Not out loud, anyway. They were all teachable, and often self-taught, moments. But, as a neighbor told me, too late: “You should have just built a house of your own.”

We’ll fill up the raised garden beds with potting soil so the blocks don’t show. But it’s alright that the glue shows, and the colored popsicle sticks.  That’s alright.