It’s getting a little repetitious, but there were again many more tomatoes. The warm weather continues and there are still many fruits on the vines, so this may not be the last of ’em. 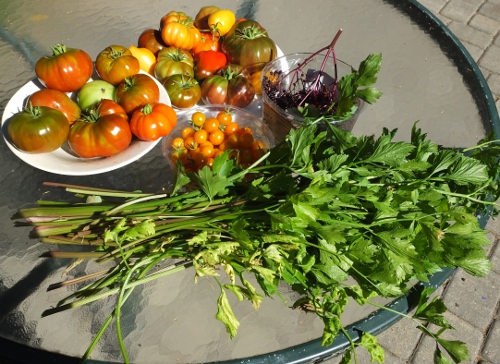 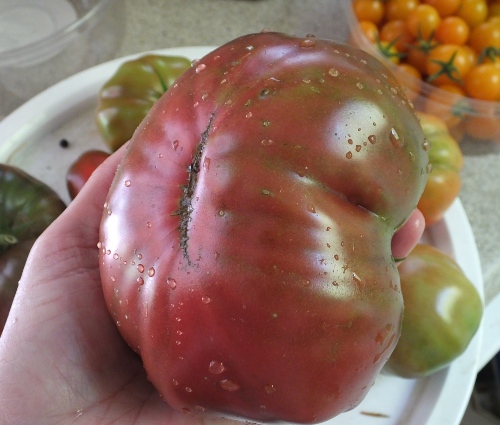 I’m looking forward to next summer, when I’ll have the super sunny front patio to grow tomatoes, peppers (can you spot the red one) and eggplants. The crew starts work on it in a week or two.

I went into the bees just now and found very little honey, just four or so full frames. There are lots of frames half-filled, half-capped. The bees were hard at work there, though (at least I hope they were, and that they weren’t gorging on honey in preparation of a swarming!). So perhaps I just need to be a little more patient and I’ll get another ten or so frames from both hives.

The generation of hens – three two -year-olds, one one -year-old and four 6-month-old pullets – have been combined into one coop. There’s a quite a bit of pecking, but not too much. The poor one-year-old gets the worst of it. No eggs from the pullets yet.

I am so thankful to these chickens for many reasons, one of which follows. Amie had her kids’ birthday party on Sunday (we postponed it because in Summer many of her friends aren’t around) and I promised to make the heatwave cake. I had bought a dozen organic, free-range, extra large eggs at While Foods. What junk that was! The egg whites were like water, one whipping and the yolks turned beige. The first roll wasn’t up to my standards, so I made another one with an extra egg (that one failed because we just got a new-to-us range, and I must have pushed the wrong button; it was yummy but impossible to roll up). After french toast that morning, we had only 2 homegrown eggs left, but the hens laid three more, just in time for me to make one more roll, which was perfect. I’m happy I made that many, because the nine kids ate ALL THAT CAKE. It went so fast I didn’t get to take a picture.