After a month of consistently, sometimes brutally freezing temperatures, we had a thaw today. It reached 40 degrees! I dumped all indoor plans and got suited up – necessary because the snow is still above my knees, and up to my waist in certain places. I slipped into the trusty muck boots and the thick gloves, but skipped the hat after a while, for the sun beat hard and warm, and there was no wind. 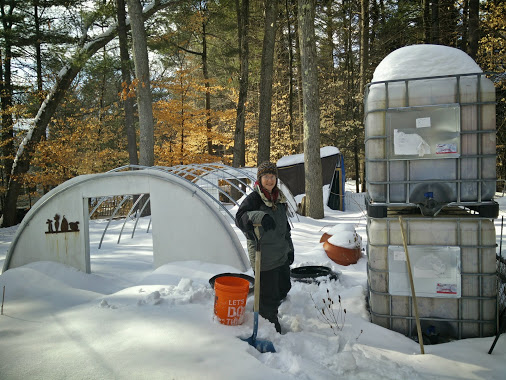 First up: a trip to the compost bin. We had been collecting our food scraps in buckets on the porch – which is fine as long as they’re frozen, but not so good when they defrost. I plowed my way over there, then dug out the top of the bin. In the image I’m standing on top of the snow. The black rim behind me is my Earth Machine. Looking down into it afforded a new point of view. 2 five gallon buckets of food scraps went in. I didn’t close up the bin just yet. 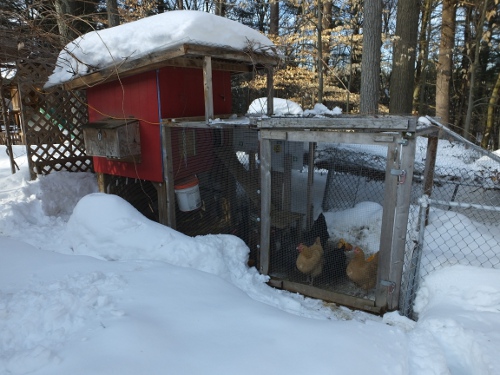 Next up, the coop. I took the picture above standing on top of the snow again. Those first layers really pack down. The heat in the deep bedding that worked so well last year could not keep up with the bitter cold, so all the chicken poop sat piled up in stalacmites, frozen. I opened the back of the coop, hacked away at the mess, collected four 5 gallon buckets. These too had to be dragged to the compost pile. Then I had to play some heavy tetris with chairs and tables and bikes and the lawn mower in my shed, all to get to the bag with clean wood shavings. But the hens can be happy with their clean coop. They’re laying about three eggs a day now. Thank you, Ladies! As soon as I can conceivable get to the snowed-in hay, I’ll spread it over the muck and mud in your run!
Here’s some of our fire wood: 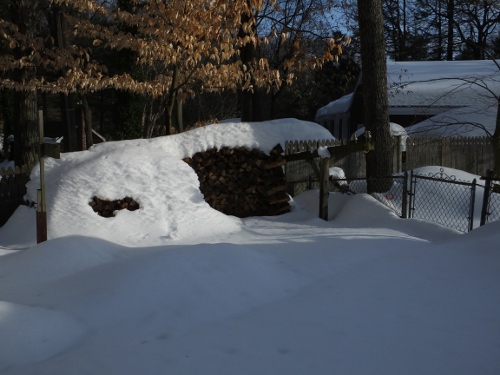 It’ll be for spring.