On Thursday I enjoyed no less than three hours visiting my four hives. The idea was to inspect, do a varroa mite sugar roll and assess if the bees need treatment, check for swarming, and assess which hive(s) I could split.

Hive 1 (Italian Queen: Borgia), was doing well: good population, all types of brood, eggs included. I didn’t see Borgia herself, but there were many fresh eggs, so the hive is queen right. Their mood was good too, so I did a sugar roll. I tilted a crowded brood frame toward myself and rolled the rim of the mason jar down over the backs of the bees. They fell right in, but I had to be fast to keep them in! Still, after two tries I had about half a cup.

Just look at that field! Who wouldn’t want to enjoy three hours in that field?

No mites came off them at all. That made my hard decision about treatment easy. I will keep monitoring. I returned those ladies, all sugared up, to the hive. Only one had perished. The rest went right back in.

Hive 2 (Italian queen: Constanza) was a bit worrying: less people, and I also spotted only a few eggs. Also no Constanza, and I was looking for her. For each hive I was going through frame by frame, recording what I found on my data sheet, so it was taking me a long time. I decided not to do a sugar roll. The brick atop this hive was replaced vertically: a flag.

Hive 3 (Italian queen: Beatrice) was a bit light on population but looked good brood wise. Lots of eggs. I even spotted Beatrice herself, cowering in the corner of a frame, not very queen-like. But the brick went back on, lying down. 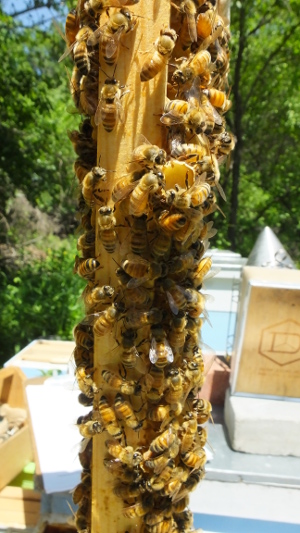 Then came hive 4 (Italian queen: Bianca). Even visually, walking into the bee yard, she was clearly the heaviest in population. As I started my visitation of each frame, a suspicion was soon confirmed. These girls were getting ready to swarm! No eggs at all, and no less than six massive, occupied, but as yet uncapped swarm cells. 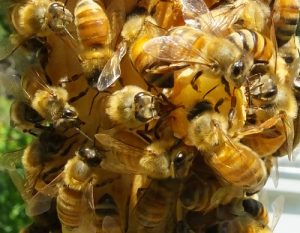 Look at those big grubs, swimming in royal jelly.

I cursed a little, because it looked like perhaps I had wrecked the queen cells by moving the frame. If I damaged these to-be-queens, then this hive would be queenless, because there were no more eggs to make a new queen from, and wrecking the swarm cells may not stop them from swarming.

The hunt was on, then for the old queen. It didn’t look like they had swarmed already. They usually only take off when the swarm cells are capped. They also take a lot of honey with them, and this hive was still loaded. So Bianca must still be around. Having spotted her during my last inspection, white dot and all, I had good hopes, so I went through each frame a second time. She wasn’t in the honey super of largely not yet drawn out foundation, above the queen excluder. I couldn’t find her in the second brood nest (the medium with the swarm cells). And I couldn’t find her in the bottom nest box (a deep). The bees by now were rather ornery – who could blame them! I closed up. 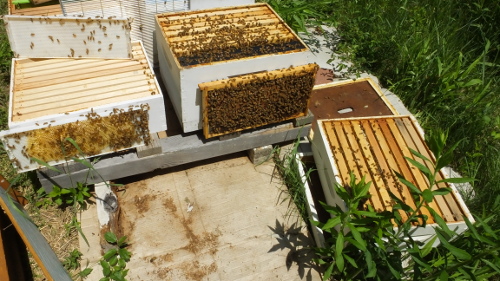 I hope to go back later today, before the rain, for one last effort to find Bianca and put her in a nuc. I’ll monitor the new queen situation closely – luckily I have two mated queens coming, from Sam Comfort’s Anarchy Apiary stock, so if I need one, they’ll be here Tuesday or Wednesday.

I walked across that beautiful field to have a look at the swarm lure one of our other beeks had put there: it was still empty… Bianca had better be home and up for a change of venue today!

{UPDATE} Couldn’t find her. I moved frame by frame into another box: no sign of her. I did find some more swarm/supercedure cells (hard to tell), capped and safe on the side of a bottom box frame, so if they swarmed/are swarming, there will be virgin queens. I also found a nice clutch of eggs of Constanza’s, so Hive 2 is probably fine.

It’s definitely a swarmy season. Here’s one frame in Hive 4’s neighbor, another beek’s nuc: riddled with swarm cells. Those four bottom ones are all full and capped and ready to go. 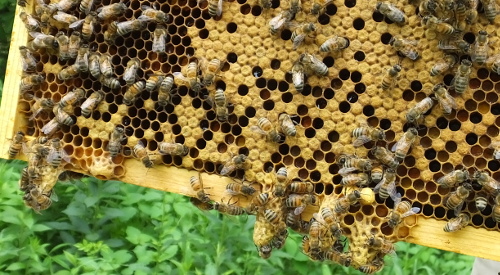