We are big fans over here of Rosemary Wells. We adore the Mother Goose book she did with Iona Opie, but our absolute favorites are the Voyage to the Bunny Planet books. There are three of them, but we only own The Island Light (about Felix) and Moss Pillows (about Robert). I stumbled upon them at a garage sale. The other one, First Tomatoes, I haven’t been able to find.

Amie was at first fascinated with Felix being held down for a shot and having to drink medicine that tastes of gasoline. Now she is more interested in the bunnies’ real problems: Felix being sick in front of the whole art class and his parents forgetting to kiss him goodnight, bespectacled Robert’s need to be alone in a house full of rowdy cousins, arguing adults and noisy television. She totally understands that they “need a visit to the Bunny Planet”. She has even started speaking of going there herself (“When I was a baby and I was sad, Janet came and took me to the Bunny Planet” – Janet BTW is the Queen of the Bunny Planet).

DH was not so keen on the stories: child bunnies under stress escaping to imaginary worlds that wholly cater to their fantasies! But I like the quirkiness. I even say they actually demonstrate great compassion and understanding. And I love-love-love the illustrations.

Today Amie made a double-sided drawing and dictated a letter to Rosemary Wells requesting that she write more Bunny Planet books. We’re putting it in the mailbox tomorrow. 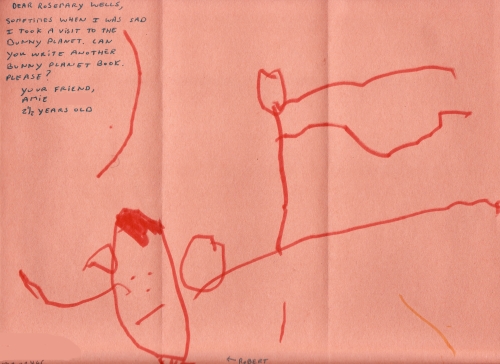 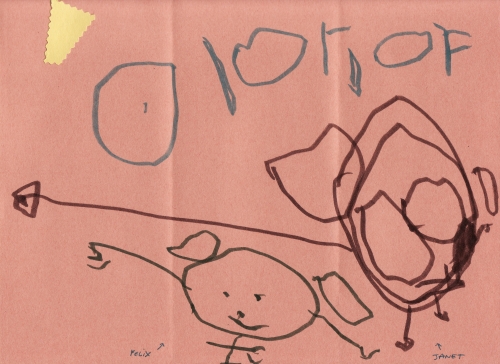 Felix and Janet, the Queen of the Bunny Planet

As you can see, the tadpoles are back again, exclusively. Those bodies were only a blip. And for the most part the mouths are back inside the faces. But look at the ears now!

The first O on the last page is the Bunny Planet. Then it says “Felix” and “Janet” – she is so into “writing” now!

Rosemary has her own website with activities, coloring pages and bunny money.