Last night, Amie woke up around 2 am, with a scream. She had had a nightmare and, as usual when that happens, she demanded the nightlight be turned on, then proceeded to lie awake, eyes wide open, for two hours. Mama knows because Mama too was awake that entire time – oh the pleasures of co-sleeping…

This evening at dinner we discussed the nightmare and for once she remembered it. She explained:

– I dreamed about Mudge eating the blue snow glory and in my dream his mouth was a big triangle and he gobbled Wall-E up in one gulp!

Wall-E is from Wall-E. Mudge is the dog from Cynthia Rylant’s Henry and Mudge stories, which we’ve been reading non-stop. He is a big dog, but the sweetest, gentlest creature ever to be put down in a children’s book. Still, his size and him eating a blue flower in one of the books was enough to earn him a trip to Amie’s nightmare land. 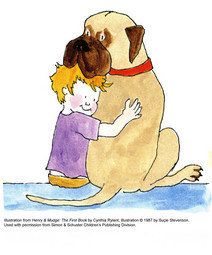 – So no more Henry and Mudge as bedtime storied? I asked. I was saddened, because I love reading them to her: they’re so funny and sweet, I love the mother and father, and Henry is, like Amie, an only child.

– No, said Amie, better not, because Mudge is just too scary.

As Henry would say, Aw, Mudge!