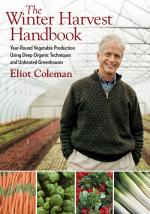 I bought the book. Nowadays when I want to buy a book I get it from the library first. After a couple of weeks of perusing and handling it, I might think differently about spending $15 on it… Not so with Coleman’s Winter Harvest Handbook. It’s full of hard practical advice and it’s beautifully made and I couldn’t wait to underline and make notes and set exclamation marks in the margins. 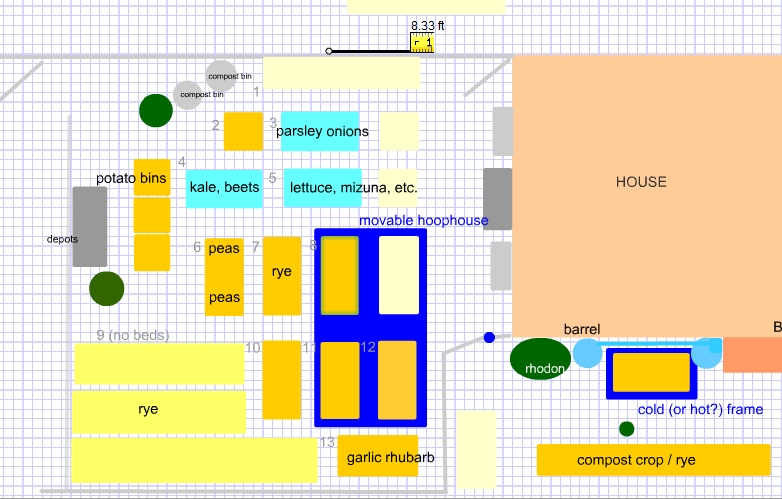 We are about to build a “cold house” (an unheated hoop house) out of pvc pipe and plastic cover, that will cover four beds (dark blue). Inside the hoop house each of these beds will be covered with an extra layer made of row cover. In these doubly-covered beds I’ll grow lettuce, spinach, broccoli, chard, kale, parsley, carrots, arugula, leeks, mizuna, mustard greens, scallions and beet greens.

Some beds (light blue) we’ll cover with row cover at first and an extra layer of plastic during the coldest months. This double protection is one of Coleman’s three components of the winter harvest. In those I’ll grow the most hardy crops (mache, mizuna, tatsoi, pak choi) for Winter and early Fall harvest, and I’ll tuck in arugula, pea, carrot, beet and onion seeds for overwintering and germination early in Spring.

I’ll try some of those crops in the small glass covered frame (dark blue in front of the house), which I want to convert into a hot frame, heated with decomposing horse manure. I just found out that my source – a horse owner right around the corner from our house – uses wood shavings for bedding, which Coleman considers detrimental to vegetable soil, so I might only use it in the hot frame, where it will not be mixed in with the growing soil but will only be used to heat that soil from underneath. I still need to find out exactly how that’s done… (Good news is that the horse is on no medication whatsoever.)

The hoop house will be light and portable and the idea is to get four people together in late Spring to pick it up and move it to another collection of four beds, where it will create a nice environment for the usual greenhouse plants, like tomatoes, eggplant and peppers. In the Fall we’ll pick it up again and move it to the Winter Garden beds.

This means I’m going to have to be a lot more careful about crop rotations than I have been. I must say that crop rotation is a problem for Square Foot Gardeners. This year’s problem with blight made that clear: if you had blighted potatoes and tomatoes scattered all over the place this year, you might not want to grow any Solanacaea at all next year. I did some SFG this year, but I think I will move to more conventional beds and row next season.

This is, of course, yet another grand experiment, but so worth a try. I had no spinach whatsoever in my first garden: my spinach seedlings bolted in Spring and I’ve been craving it ever since. If only the spinach works out, I’ll be happy!