Bright and not too cold out. Amie back to preschool after more than a week’s hiatus. I’ve got two hours to spend in the garden! 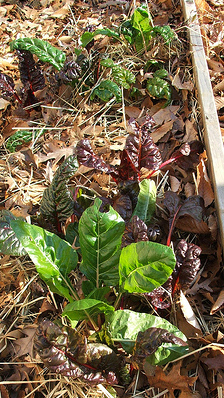 The horse lady was not at home, and just 2. took all of the daylight, and still isn’t finished. So I can’t cross anything off my list as yet

It does feel like I got a lot done, though. Four veg beds have been cleared of leaves, branches and acorns, hoed, covered with about 10 inches of homemade compost, then a good half foot of fluffy fresh straw (which is now $9 a bale at the feed store!). The five large front beds have been cleared and hoed, but only two of them have been given compost, and none are covered with straw. Tomorrow, if the weather permits again. I will have to break open a bag of MooDoo, because I’m out of finished compost. I’m thinking I’ll put the cardboard on once the straw has settled a bit.

When digging up my three compost bins I saw a noticeable difference between them. The one made of chicken wire, which held mostly veg garden scraps, was the least decomposed. The compost in the Earth Machine that’s also in the veg garden was nice and crumbly, but I spotted not a one worm. The Earth Machine that receives all our kitchen scraps was loaded with earth worms, thousands of them, with hundreds curled up together in balls, but a lot of the stuff in it wasn’t finished yet – it gets replenished every day. One lesson: I need to turn my heaps more often; there were several anaerobic patches. Another lesson: I’ll need more compost bins, and sturdier ones than the one made of chicken wire.