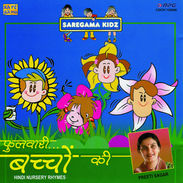 Amie’s auntie, my sister-in-law, whom Amie calls Toot-Toot-Pishi (“Pishi” is the Bengali word for aunt-on-the-paternal-side), so very generously gave us a wonderful cd of English nursery rhymes as sung by Preeti Sagar, an Indian singer (see insert on cd cover above).

Well! Thanks a bunch!

The problem is not that Preeti, who is otherwise sweet-voiced, pronounces “heatlhy, wealthy” as “healdy, wealdy” – I’m used to that by now. Or that she changes the alphabet song and ends it with “zed”, which is sure to confuse my American kid…

No, it’s that those darned songs have invaded my skull and glued themselves to every neuron in my brain! That I find myself walking in the street singing “Little Jack Horner”. I have the same problem with the “Family Music Makers” cd that was gifted to us by our daycare, and which mercifully has not been requested in this household for several weeks now. Those are the only two children’s music cds we own… and I’d like to keep it that way.

Amie loves that music, of course, but I wonder if it has an equally dementing effect on her brain as it does on mine. Has anyone done research on this?

I think with envy of that good soul, Catherine Newman. In Waiting for Birdie (the book that saved me from the clutches of the baby-blues in my first month of motherhood), she writes that her three-year-old son, who was never introduced to children music, sang along with Led Zeppelin etc. Sigh! I tried that, but outside forces conspired against me.

I really should be napping with Amie right now, to combat my jetlag, but I know I’d only be lying awake reheasing “Georgy Porgy”.