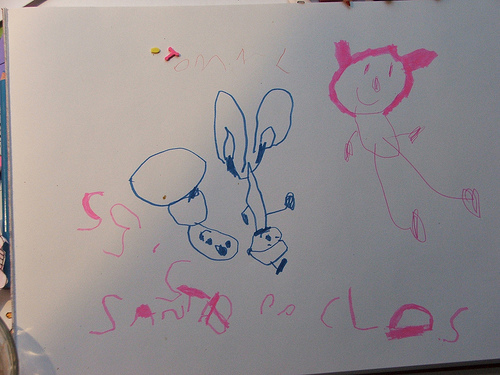 I’ve been quiet about Amie’s reading and writing here because it’s tough to know where she stands. One day she reads and writes enthusiastically, the other day she won’t even write her own name properly (and that she has been able to do since she turned two).

She has been reading simple words, slowly stringing the sounds together and in some cases sight-reading them (“the”, for instance). Yesterday we made a quick visit to the mall (I know! It was horrendous. I got a splitting head ache. But we had to pick up our new glasses) and as we drove by she read: “S-Eh-Ah-Ruh-S” but couldn’t make sense of the word. She listened carefully to our explanation that “E and A in this case sounds like Eee, but sometimes it sounds like Eh, as in BEAR”. Wow, it must be so confusing to her! But she takes it all in stride.

She can also do the process in reverse, spelling out the words. She can isolate the sounds pretty well and then write them down as she hears them. She can write all the letters, even the S, sometimes mirroring them.

Some days ago  sat with her as she drew the picture above. It’s of Santa and a snowman (for some reason she drew these upside down, getting the smiles right) and Mama (“with sweet fluffy ears”). I helped her practice her S and spell “Santa Clos”. Later on, when we were not around, she wrote on top, in a combination of pen and sticky letters:

When I asked her what it means, she said:

She hadn’t quite remembered how to spell the EE sound, so she had invented her own sign for it.