It’s 8 in the morning and everyone is asleep but me. I’m in bed, next to the sleeping bodies, trying to type quietly. They lie so deep, while I’m on the surface, eyes wide open.

I’m looking out of the bedroom window at the trees in our western garden and in the neighbors’ garden: beeches, birches, oaks and many pines. They are covered in the snow that fell during the night. Once in a while they release some of it and the wind picks it up and runs with it.  Narrow columns of snow move sideways, like smoke from a chimney. Tall, billowing veils glide along majestically: snow ghosts. Sometimes the view is a white out. It’s breathtaking, peaceful yet dangerous.

I love living in this country. “This country,” as in: this land, this place. I revel in its biodiversity, which I know is sorely depleted but still so much richer than in Europe. So many animals and flora seem so alien, so new to me: the huge puffball fungi, the foxes, the big beetles, even the deer. I am in awe even of the deer.

My Dad,  when at dusk he got out of the car after we picked him and my mom up from the airport in September, stopped still in his tracks and said: “What is that sound?” I stopped too, listened. What was he hearing that alarmed him? Oh, the crickets! Thousands of them, chirping away, very close and all over, all around us. No more crickets in Antwerp?

And I love this winter, the first in our house. Though I complain of our heating bills, I am grateful for the bitter cold (- 22 Celsius on 1 January , though I missed that), for the snow fall and snow drift. It excites me, a girl from Belgium, where a deep freeze and a snow  storm were events. Even in Brookline, where we lived until June last year and where the snow was cleared immediately by town and condo cleaning crews, I had not done this: walked on top of the snow, on the crust frozen so hard it is like walking – precariously – on stone. 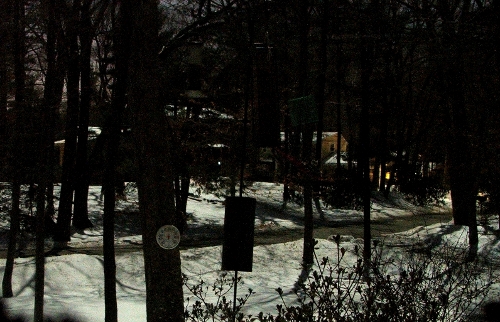 DH took this picture two nights ago. That’s the light of the almost Full Moon, the Full Wolf Moon of January, touching down on our front yard. I have never seen moonlight like this. In Antwerp and Brussels, and Brookline and Alston, too close to Boston, moon and starlight were washed from the night sky.

I stood looking out the window then, at that white-blue glowing snow, the creeping shadows of the tree trunks and branches, and then up, along the stark beams of the towering pines and oaks, rising up, up it was like being lifted, by that light, up into the shimmering sky.

I was in awe, weirded out and attracted. I live in a strange and wild place.