Over the holidays Amie got to stay for several days over at her friend, E’s, place in NY. E is four and a half and bright as a button and she loves playing with Amie. They are well matched for verbal communication – they both love to talk – and they are both interested in making art, like drawing and making paper flowers. So there were plenty of opportunities for seeing the two of them create together.

There was a great moment when E asked Amie if she wanted to learn how to draw a butterfly. Amie was keen and she followed E’s instructions carefully.

This is E’s drawing: 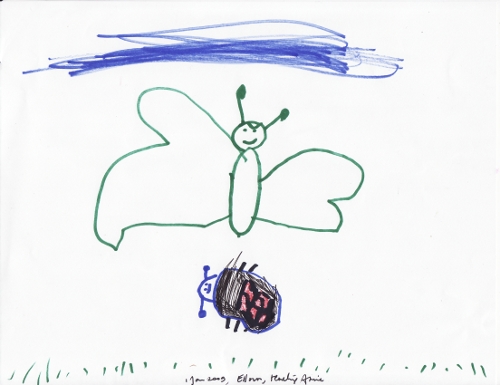 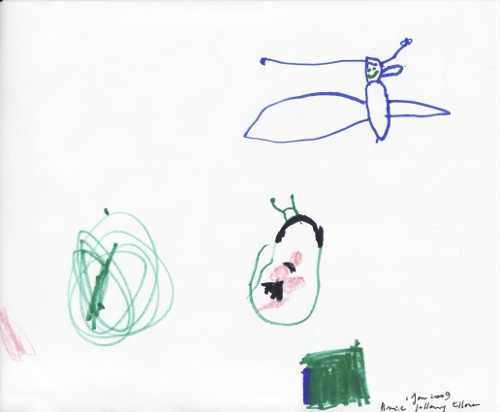 It was fascinating to witness their exchange. For instance:

E says: This is how you draw the body. [E draws the long oval shape of the butterfly pointing away from her]

Amie carefully copied the shape. They were sitting at a 90 degree angle to one another, and Amie drew hers in the same direction as E’s.Â  E saw this and it didn’t look right to her, so she turned Amie’s page so her butterfly body would also point away from her.

Then E drew the antennae. And gave her butterfly an ear. BTW, much earlier on I speculated that some theories might be right: that children’s draw animals more “realistically” earlier on than human figures (namely tadpoles), because they are “freer” (not caught up in the animal body) to see its shapes correctly. Amie back then (at 24 months) seemed to have a better idea of the shape of a dog than a human. But ever since she has left the tapole figure behind, all her animals have looked like human! This eared butterfluy is an example.

E had no such illusions (but she has probably drawn a lot more animals, in particular insects, than Amie).

DH explains: Amie, those aren’t ears, but antennae. Draw it like you draw arms and legs.

Amie did so, so her butterfly has one ear and two antennae. (We don’t erase.)

Then they went on to the ladybug. unfortunately all of us adults were distracted so none of us witnessed that. Going by the evidence, Amie seems to have made an attempt which was not right, and moved on to another ladybug. E’s drawing also has sky and grass, Amie’s doesn’t – I don’t know what that green square represents.

It was pretty neat to observe them. Amie obviously paid a lot of attention to E’s instructions. There’s more drawing with E to come!