This is the second article in a series on how calcium and other nutrients end up inside our vegetables, and on how to interpret certain soil test results. You can read the first part here.

2. The soil’s ability to hold on to this calcium: colloids and cation exchange capacity

The soil needs to store the weathered bedrock calcium, keep it from leaching away to where the plant roots can’t reach it. Certain clays (very fine inorganic particles) and organic or humus particles form colloids: thin, flat plates with a large surface area that has a negative electrical charge.

As such they attract or adsorb large quantities of positively charged ions, or cations (pronounced cat-eye-ons), which comes to adhere to it with a weak electrochemical bond. As the cations are taken from this storehouse by plant roots (see 6), other cations in the soil water replace them on the colloid. This is called cation exchange.

For example, hydrogen (H+) is such a cation, and it’s part of H2O, so water molecules are attracted by the clay’s negative electrical charge. 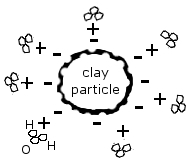 That is why clay is good to have, since it holds on to water so well. But if your soil is mainly clay, it’s not so good, because the clay will lock the water molecules into bond that is so strong that the plants’ roots will not be able to break it. So the soil may hold a large amount of water, but much of it is actually not available to plants. On the other hand, a soil that is too sandy) will not be able to hold on to anything, water or nutrients, because sand particles have no electrical charge.

Cations will compete with one another for a place on the colloid. Some are charged more than others, for instance, calcium (Ca++) is charged twice as much as hydrogen (H+), and aluminum (Al+++) is even stronger. An aluminum cation borne along by the soil water can easily knock a hydrogen cation off the colloid and take its place. If the soil water bears a high concentration of a particular cation, those cations will replace other cations on the colloid, for instance, a swarm of calcium ions against one sodium (Na++) ion.

This image (source) shows the flat, plate-like structure of the colloid and the negative charges along its edges:

The stronger the colloidâ€™s negative charge, the greater its capacity to hold the positively charged cations. The kind of clay (for more details, see here), its mixture with sand and organic matter and its crumb structure, all determine the soilâ€™s capacity to hold cations against leaching. This capacity is termed the soilâ€™s cation exchange capacity (CEC) – an important term on your soil test results. This CEC is expressed in milliequivalents per 100 grams (meq/100g) of soil or in centimoles of positive charge per kilogram of soil (cmol(+)/kg). 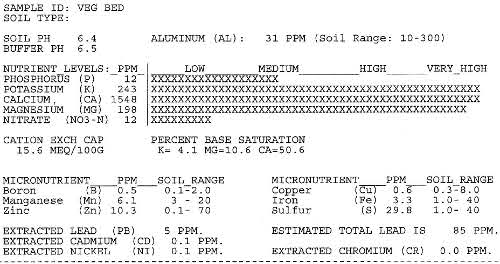 That explains at least one unknown on that soil test! Next up, in Part 3, the role of water in all of this: it is, after all, the soil water that brings and that can take away these cations.