So I did all that canning last year and ended up with a little more than what you see in the picture above. So far we’ve eaten half the tomato sauce, a lot of apple sauce and blueberry jam (but not half, not by a long shot), a quarter of the peaches, and some of the fig preserves. We liked all of those.

We did not like the green peppers (bitter, metallic taste, is that normal?) and the green beans, of which we have, sadly, a lot (good for a soup, or a casserole?). Those two veggies are going into the freezer next year!

Tomorrow I’m making split pea soup with two of the many pounds of dry split peas that I bought in bulk and store in the chest freezer. I’m also going to make an apple-peach crumble with store-bought apples and my canned peach pie filling.

My attempt, a while ago, of “root cellaring” store-bought (organic) potatoes on some stick on top of a bucket of water inside a large black plastic bin in the coldest part of our basement… resulted in all the potatoes sprouting in record time. Wha? They were in total darkness! Very strange. Could it have been the plastic? Maybe I should try a metal bin next time.

And here is the promised peek inside the hoop house. These pictures are from when it was still freezing. 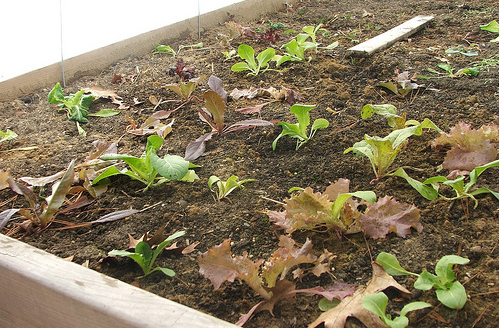 All kinds of lettuces, mustards, and spinach, doing well 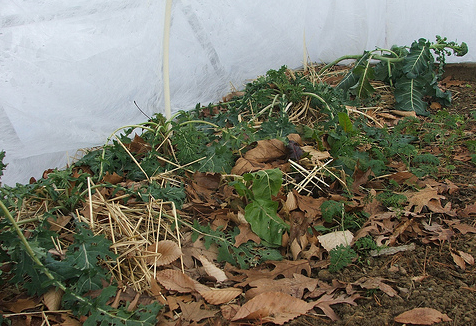 Russian kale, Swiss chard and broccoli (in back) lying down a bit but surviving. Can’t wait to harvest those carrots (to the right)

In the third bed the parsley is also laying low but surviving. The mache and claytonia that I sowed there way too late have germinated and the seedlings are tiny but fine, waiting it out.

I haven’t been in there since the thaw started (we’re in the 40s now during the day, and at the moment it’s raining all the snow away). I’ll have a look tomorrow, when (if it stops raining) I will move the compost from the Earth Machine that’s close to the kitchen (it’s too cold for the kitchen scraps to decompose, so that bin filled up really fast) to the empty one in the hoop house.It would be great to have some finished homegrown compost by the beginning of Spring.

We readied the basement area where I will start the seedlings again. I can’t wait to turn on those lights! We decided I’d stop mucking around with  various hot germination box designs, and buy a large seedling mat (with thermostat). If you have a particular one that you’ve have tried and like, let me know…. soon.

Don’t forget to scroll down for the second and, may I say, most riveting installment in the “Calcium in Soil and Compost” series, published a few hours ago.