The bees have been busy. I can see a lot of activity at the entrance, lots of flying in and out. Perhaps it was the weather – coldish, gray – that kept them inside, or the fact that they first needed to draw out more comb before going out to get stuff to put in it. But now they’re definitely foraging, because I saw large pollen baskets on the bees when I did my hive inspection yesterday. 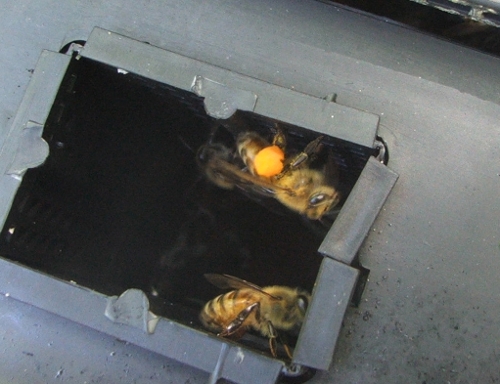 This was the tenth day inspection (a day late since the actual tenth day was too windy and cold) and an important one. Let’s say that the queen is released from the queen cage on the 3rd day (D3). Assume she lays a worker egg on that day. For 3 days this worker bee will be an egg. She becomes a larva on the 4th day of her life (D7), when the workers start feeding her. On the 5-6th day of her life (D10) her cell is capped with wax. On her 10th day (D15-16), she becomes a pupa and she will stay in the cell for 12 days, to emerge on the 21st day since her life began as a new bee (D24).

All seems to be going according to plan, for I saw capped brood, as well as fat larvae, not so fat larvae, and eggs too. I can expect the first new bees to hatch on the 27th of May, and many new bees in succession after that. 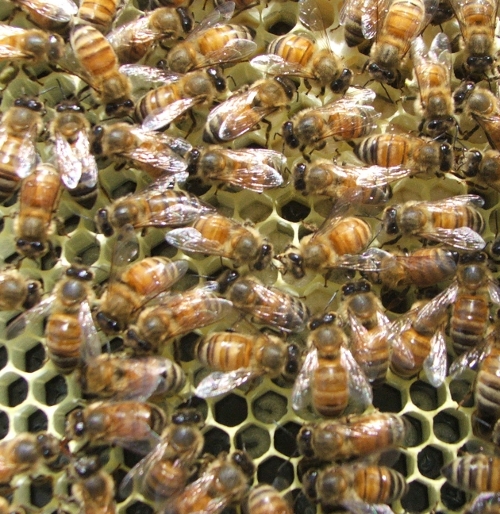 Workers busy feeding lots of fat larvae and, if you look closely, you can also spot cells with eggs 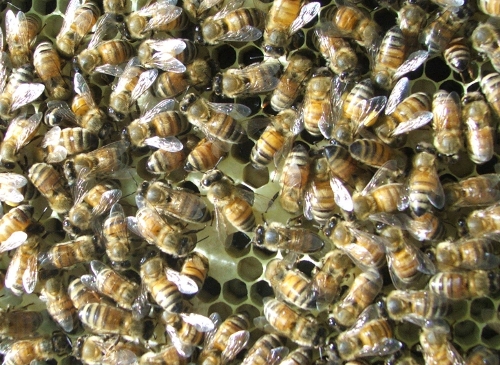 There was also more comb than when I did my last inspection, and some of it filled with glistening nectar, pollen, and honey (?). 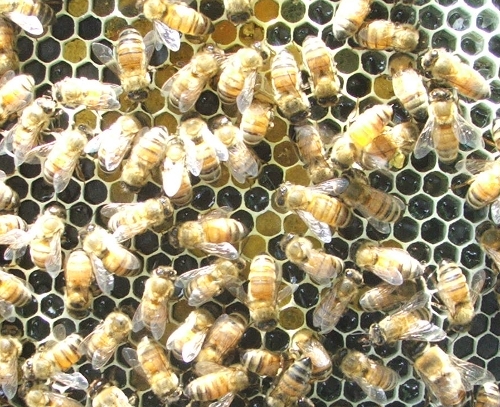 There was a nice half-moon pattern to it on one of the frames:

Lastly I had no trouble spotting the queen: 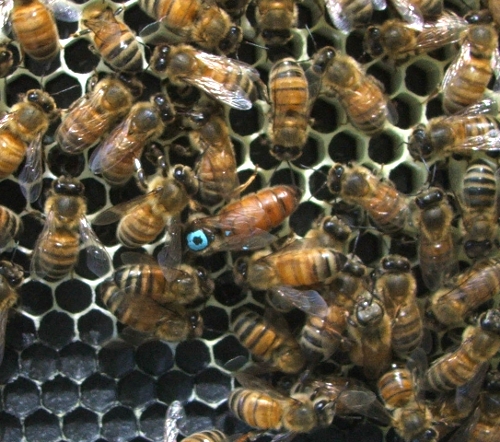 I recommend this neat YouTube video of a Queen laying eggs. The beekeeper in the video, George Muhlebach, also offers the trick of nudging bees out of the way with your finger: they get nudged constantly by their peers, so they don’t mind.

I also didn’t find what I didn’t want: supersedure cells (cells for new queens) or drone cells (which are bigger, and the caps of which stand out, like bullets – see video), which could indicate an infertile queen or a laying worker (each of which have unfertilized eggs, which can result only in drones). All these would indicate a faulty queen. This video is also interesting in this respect.

I also pored over the frames looking for mites. I couldn’t spot any. Not that I presume to be able to spot them, anyway, yet, so  in a few days I will nevertheless put the (natural) mite treatment into the hive.

From that last video I learned the trick of putting a roll of chicken wire or some such underneath the hive entrance. Skunks come at night and scratch on the landing board, so when the guards come out to investigate they eat them. They can do this for hours and disseminate the colony. They don’t like to put their paws on the roll because they’ll fall through, and even if they manage, they need to stand up and the bees can then attack them on the belly and that will keep them off. Luckily I have lots of that stuff lying around! 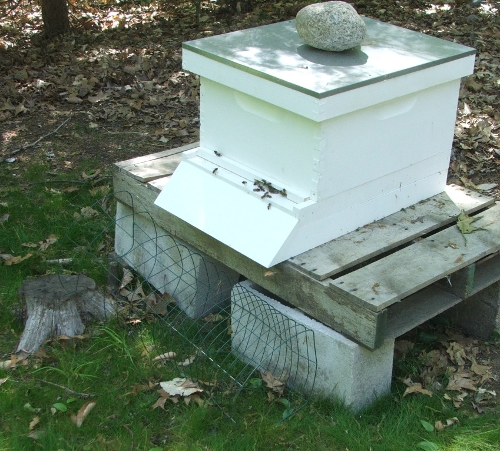