Right before we left for India and for quite some time while we were away the weather was bitter cold. Aside from the winter crop in the hoop house (all doing well), the weak spot on our property where cold matters is our bees.

I decided early on in the game not to medicate, feed or wrap the hive. We’re going to need bees that can thrive in this climate. If this colony does not survive, I will try another queen, or another breed of bee altogether, until I find the one that does. That will be the queen to breed queens from. 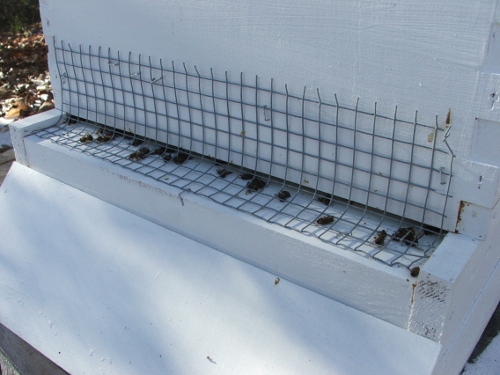 So it was with some trepidation that I approached my hive and saw the landing board strewn with dead bees. During winter there is no rearing of brood. The bees just huddle in a ball to stay warm and wait for warmer temperatures. If the queen and enough bees survive to get started up again in Spring, the colony has survived. Bees die before then, of the cold (if they’re on the outside of the ball), starvation and preferably just simply of age. Their fellow bees do not have the opportunity to rid the hive of the bee bodies. So they pile up.

But how to check if the colony is doing well? If I open the box, I’d chill them and stress them badly. So I put my ear to the hive box and heard…

There are some bees alive in there. It’s hard to know how many, what shape they’re in and how much food they have left and if they can reach it. That we will know in a couple of months, as soon as we are graced with a day warm enough to take a quick peek. 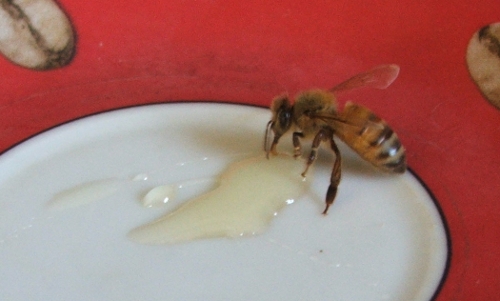 While I was checking out the hive a bee clambered out, dragged herself to the edge of the landing board, keeled over and fell down into the snow. There she shuddered, then lay motionless. I picked her up and brought her inside, wanting to see if she had any deformities or mites piggy-backing on her. Soon after coming into the warmth, she revived and I quickly put a bell jar above her. I am now feeding her some honey (from her own colony). I wonder how long she will survive.