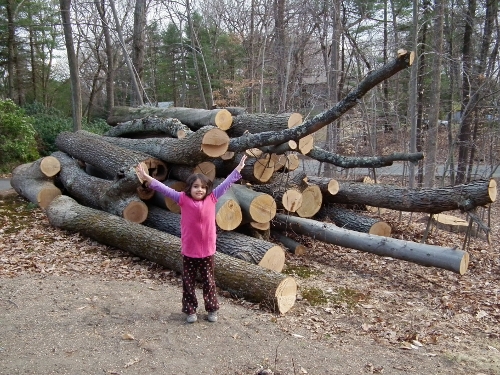 Today I found a study in contrasts in the boot of my station wagon: a cello, a chain saw.

Once home, we hooked a rope to the car, tied the other end around a log in the big pile, then I reversed to pull the trunk outÂ so DH could cut it up.

DH and I work together really well. Neither one of us had ever done anything of this kind. In preparation, DH watched YouTube videos and read the manual. Â Then we went out and laughed a lot because we couldn’t get the darn thing started. Then it did start and we got serious. Not having any experience or any other tools Â we ran into some difficulties, and we took some time figuring out the solutions and ways to prevent it from happening again. We got better at anticipating other problems, got more creative. Did you know that chalk comes in really handy when cutting logs greater in diameter than the bar of your saw? Also pieces of already chopped firewood, as wedges and stops… We worked together, wedging and pulling, gauging.

Three hours later we got one log done. Twenty-five to go.

I’m happy we bought the chainsaw and that we are doing this job ourselves instead of paying five times the amount to let someone else do it. Granted, the professionals would Â take two or three days and we’ll probably take a couple of months to get it finished. And honestly I’ll never feel entirely relaxed while DH is wielding that machine. But we’re working together, outside with our hands, using what tools and ingenuity we have. We might both have PhDs and drive Volvos, but we aren’t afraid of getting our hands dirty and getting the job done.

I read somewhere in an article on Transition a saying that I could take as my mantra:

We are the people we’ve been waiting for!

Such honest accomplishment, along with accountability, and hope.Â Wouldn’t it be wonderful if everyone could say this of themselves? Don’t sit around and wait for someone else to do it. Just do it! 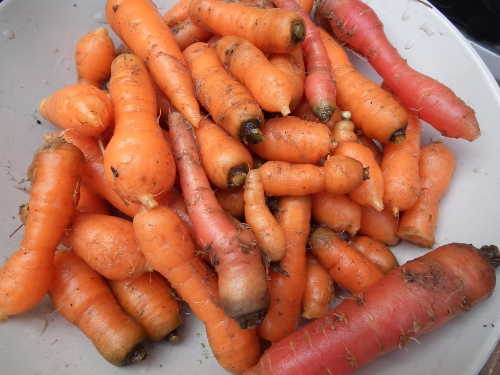 These carrots were seeded in our garden in September 2010 and harvested and eaten in April 2011.Â Extra sweet.