Saturday started with a sprinkle of rain and thunder, then cleared up for a big turnout for our planned hoop house raising. Ten people came, friends, acquaintances and strangers (i.e., new friends) alike.

First up was dismantling the structure and moving it from the summer to the winter position.

Then everyone got to witness how fence piping is bent to form a hoop.  That’s the Lost Creek hoop bender. 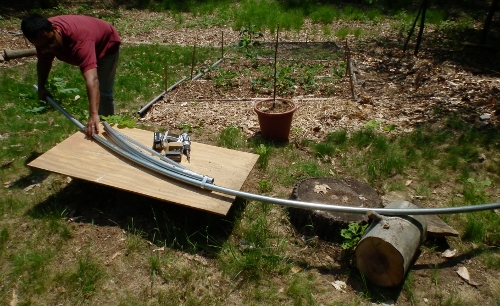 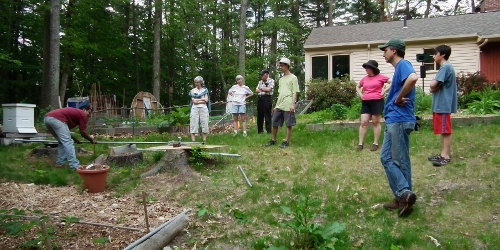 Then they got to do it themselves. We ran into an issue with the pipe connections. They fit into each other and are held together by a self-drilling metal screw. All looked fine, until once installed over the rebar, 70% of these connectors did this: 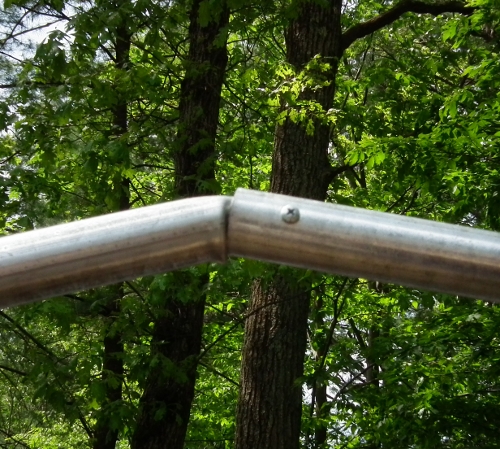 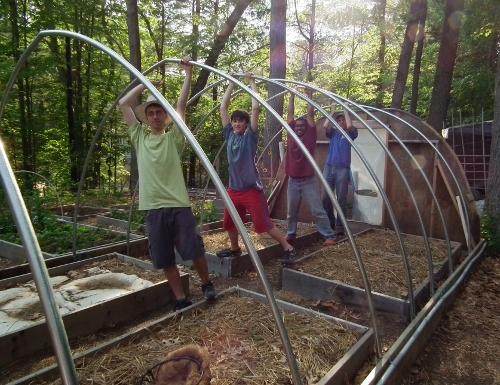 Well, at least we know those ribs are sturdy! As the problem is not structural but a matter of sharp edges tearing the hoop house plastic, it was easily fixed by duct taping foam pipe  insulator  around them.

We talked about gardening, compost tea, bees and herbal medicine while sipping cold mint tea and oat straw infusion.  One  friends also gave us a fascinating primer about drip irrigation. Seeing all those parts and connectors and pumps lit up DH’s eyes! Mine too, since I don’t want to kill myself watering my garden this Summer.

Some left with a head or two of lettuce and the plans for their own barn raising. Some stayed on for an impromptu vegetarian grill dinner, a few items in which (lettuce, parsley) came straight from the garden.

A successful first barn raising and hopefully one of many to come in our community! 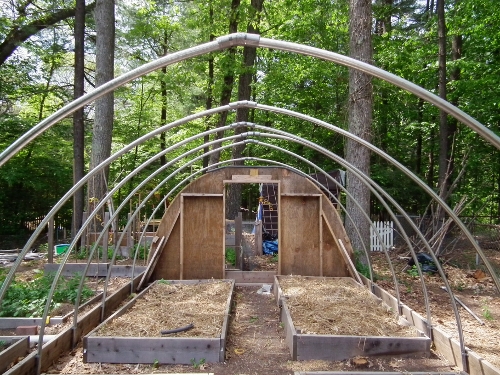 The day after that DH and finished off the structure by installing the plastic.  It is much tighter now, since the ribs are a little larger than the end walls – which hadn’t been the case with the pvc piping.  Since we used the clips again there is still the possibility of taking it apart and moving it. We’ll see over the summer if that’s what we want to, or if we want it there permanently. I really like the possibility of starting the winter harvest in outside beds while the tomatoes are still going strong inside the hoop house, and then moving the structure when the tomatoes are done and it gets colds enough for the winter harvest to need extra protection. Also, it would be another reasons for a bunch of friends to get together over meaningful work and homegrown food. 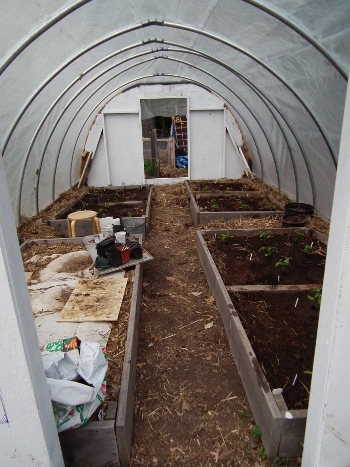 I gave the inside of the end walls a coat of exterior white to aid the reflection of the light. After being exposed to the snow and rain for months, they were pretty grubby and dark. It’s not the best paint job (should’ve done it before we put the cover on, then I wouldn’t have had to worry about getting pain on the plastic), but it’s not like anyone is going to live in there. I write that one downs as LAL – Live And Learn! 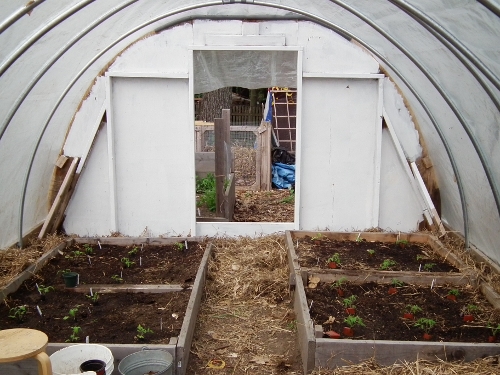 I also transplanted the 50 tomato plants, each with their own cut worm collar.  Took me four hours!

There is one bed left for lima and garbanzo beans.

Next time, join us!