Last week some of our BEElieve group met at the house of A., who was the first to pick up his bee package (that morning). The package looked very robust, with very few dead bees at the bottom. We went out to admire the setting of the hive, then A. hived the bees as I talked him through it. Seeing someone shake those 10.000 bees into the box is incredibly empowering. All went well and the bees seemed happy in their new home. A couple of days later it turned out the queen had been released and was moving about the hive, which means the colony accepted her.

Most BEElievers, myself included, will pick up our bees on April 16. On that day we’ll go from one home to the next, hiving.

I am adding two more hives to my apiary, bringing the total up to three. I ordered two packages ($100 each), then tallied up how much it would cost to house them. Well, whew! Forget about ordering the hive parts online: the shipping kills the deal (which is as it should be, of course). But even buying the hives locally came with too steep a bill. So I decided to buy the frames and foundation, unassembled, locally, and to assemble them myself, and to build the rest of the hive bodies myself (I should say, ourselves, since this requires major help from DH).

A friend who was being funny (you know who you are!) suggested we have a beehive building barnraising (tongue twister), using a human-powered staple gun, nails and hammers. Think of what a grand story that would make! The self-sacrifice, the endurance, the courage and solidarity, the hand cramps! I said I understand the power of stories and the importance of setting up occasions for them, but this ain’t one of them! Just consider the assembling of the frames, the one hundred and ten (110) frames, to be exact. Ten brads each.

That requires…. coffee, especially so early on Easter Sunday morning. 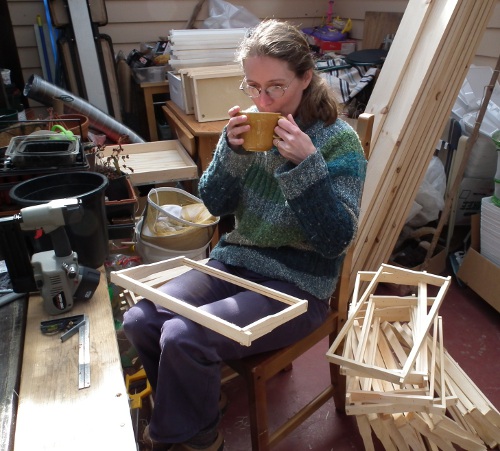 The beekeeper at her “desk”

So, first up, the frames. Unassembled frames come in five pieces: top bar, bottom bar, two sidebars, and foundation. It first looks like this: 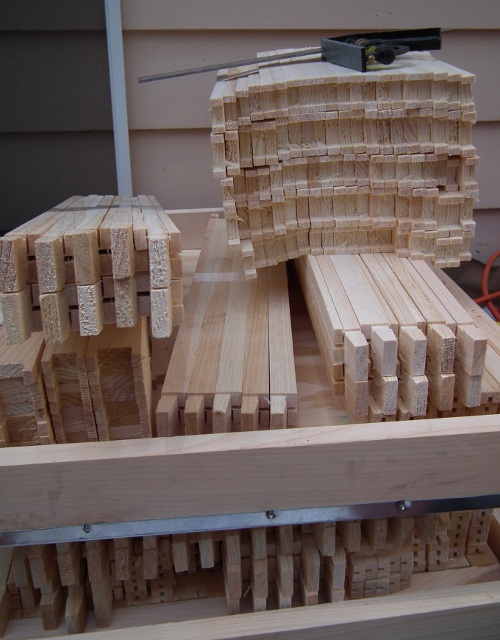 Straight from the beekeepers supply store 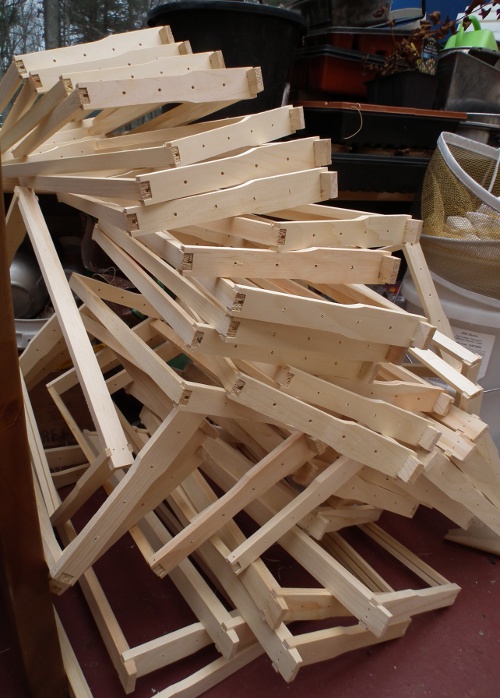 And then, eventually, likes this: 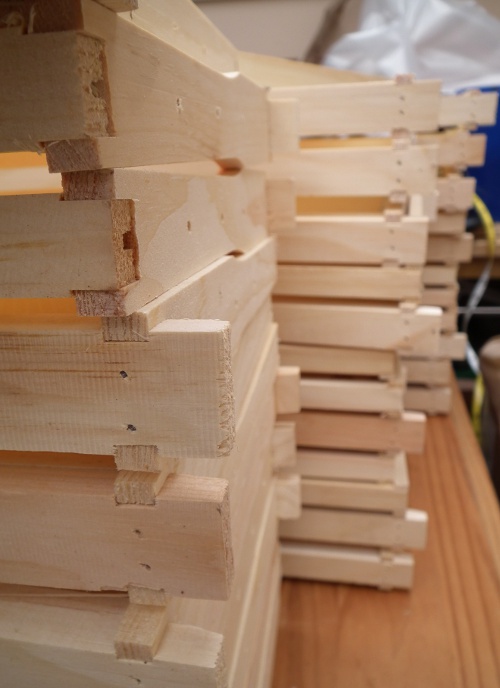 Frames with foundation, all ready to go

{What follows is a technical, detailed explanation about how these frames are put together.}

I bought frames with wedge top bars and grooved bottom bars, and my foundation is Duragilt, a very thin sheet of plastic entirely coated with clean bees wax that is stamped in the shape of cells, with a strip of metal on each side for strength.

Not finding a pneumatic or electric staple gun, I turned to our finishing nailgun: it’s pretty heavy and overkill, but it can handle the brads I needed, which  are 5/8″. The 1/2″ ones proved to be too long: when shot into the topbar at the installation of the foundation, they emerged on the other side, on the top of the top bar, a place where you want to be able to scrape without meeting sharp metal points.

Step One. Snap the wedge piece off the top bar and put it aside: 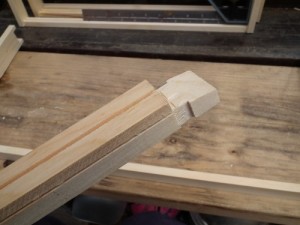 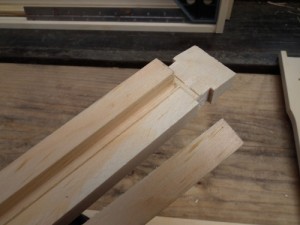 Step two. Assemble all the pieces and fit them together, tapping them snug with a hammer: 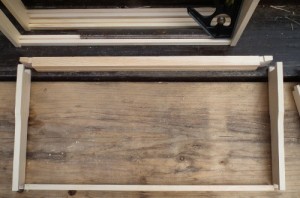 Step three. Nail the top bar into the side bars (two brads each I was told is sufficient). I used the square (see in the background)  to make sure the frames was squared. With well-milled pieces that fit together snugly, it shouldn’t be a problem: 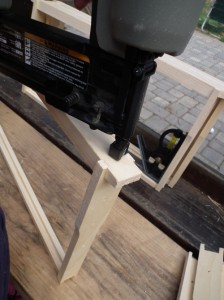 Step four. Nail the sidebars into the grooved bottom bar (one brad into each of the four corners). Again use a square: 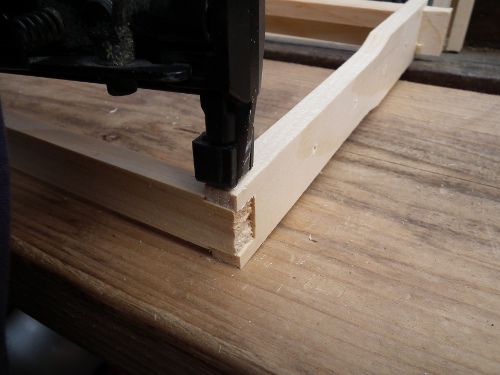 Repeat 110 times. I did this factory-wise: the same brads in the same place 110 times, then flip it over, next nails, etc. Gets boring but it’s more efficient and faster.

Step five. Install the foundation by first slipping it into the grooved bottom bar (make sure the communication holes are at the bottom): 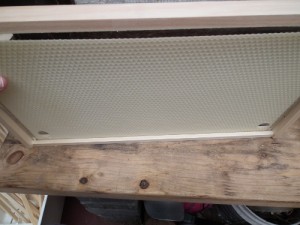 Step six. Lay the piece against the top bar and fit in the wedge piece that was snapped off earlier. This piece now keeps the foundation in place. Nail that in (three brads, this is where you need the 3/8″ brads – 1/2″ will poke through up and out of the top bar): 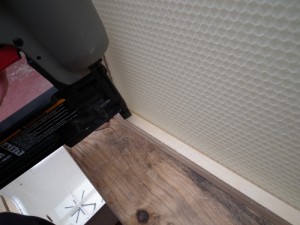 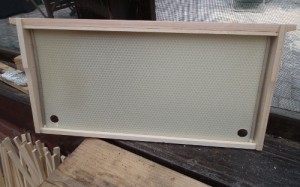 We also managed to cut all the boards for the hive bodies to size, and routered the ledges that frames will rest on. But then we lost time figuring out a box joint jig. With the first jig the joints  came out too  tight and the wood split on us. Not something you want happening to a box fill of bees! So we had to adjust the jig. Here’s DH pondering the puzzle: 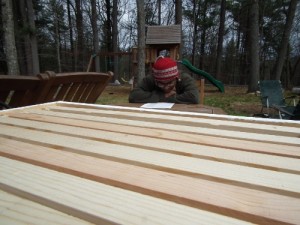 By the time we had a new one built, it was dark, and as we do the big woodworking on the patio, we had to pack up will have to wait till tomorrow to get started on joining those boxes. That will be for my next blog post.

Also check out how much it cost to build this and a comparison with a hive kit here.