After the frames, the boxes. The priority is two hive stands and four deeps, two for each of the new colonies and one for a swarm box. The four mediums as honey supers, and one shallow that I want to experiment with will be for later. I still had two bottom boards, among which is one full one which I need to transform into a screened one, and already picked up two assembledÂ telescoping outer covers and two inner covers for a song.

We cut the wood to size Â the other day, following this pdf.

We routered the rabbets on the short sides that the frames will rest on.Â Then it was time to cut the box joints, which we did withÂ a dado, a combination of blades on the table saw.Â OurÂ first jig made the joints too Â tight, making the wood split when we knocked it together. Â We built a good one. 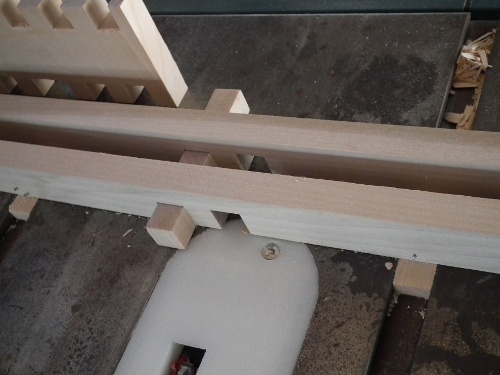 We Â even waxed the sliders that fit into the grooves in our table saw with beeswax. Worked like a charm! 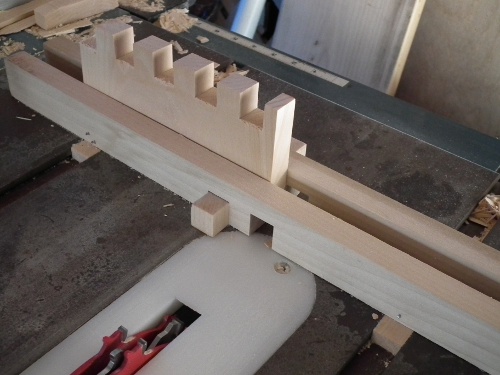 Here’s DH working the jig. He’s so good to help his wife with her slightly out of the ordinary projects! 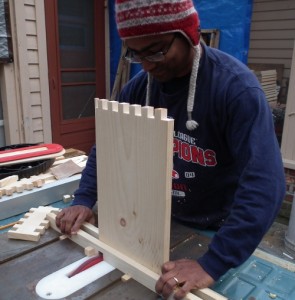 Oh, did I tell you, that this would be a LOT more work withoutÂ a router and a table saw? And a dado set?

The pine was giving us some trouble. Some of the planks are bowed, making the fit less than perfect (but the bees will propolyze any gaps). The wood also split on us, like in the picture above. I’ll fix it with glue. It’s just one notch, so it won’t harm the overall strength of the joint. 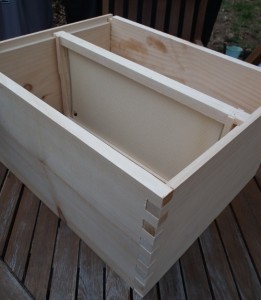 The frames fits. The box is square. Time toÂ glue the corners together with a bit of Elmer’s exterior wood glue, then to immediately pre-drillÂ a couple of the pinsÂ and hammer in the Â 1 1/2″ 6d galvanized nailsÂ so that the corners won’t shift as the glue dries. Then I pre-drilled and hammered Â in each pin. 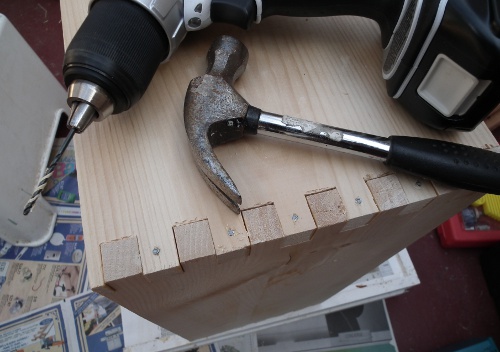 Â Here’s the end result of a couple of days work (which could all have been done in one, long day), ready for some paint: 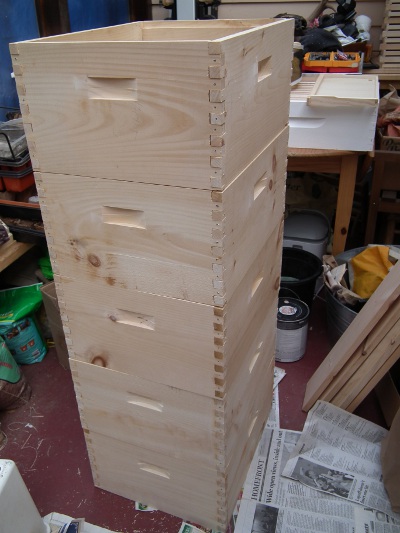 Check out how much it cost to build this and a comparison with a hive kit here.