Over the weekend DH and I hauled a bunch dried fire wood from the woodpile to the screened porch, and I cut up a lot of kindling. It was my first go with the small electric chainsaw that a friend gave us. It does the job! Another friend commented “My favorite environmentalist, using a chainsaw!” Well, I responded,Â this chainsaw is solar!

Today I was feeling a little under the weather, a bit chilled, so though it was Â still 64F Â in the house, I lit the stove. Â It’s good to test run it anyway before it becomes a necessity. While the stove was burning real Â hot – for the first fire of the season, burn it hot to clear out the chimney – I put onÂ the Dutch oven andÂ boiled water for a hot clothes wash, then filled it with squashes from our CSA. Then, when those were done,cooked a beef stew in it for dinner.Â We call that stacking functions, using one thing for many things. Feels good. Smells good too! 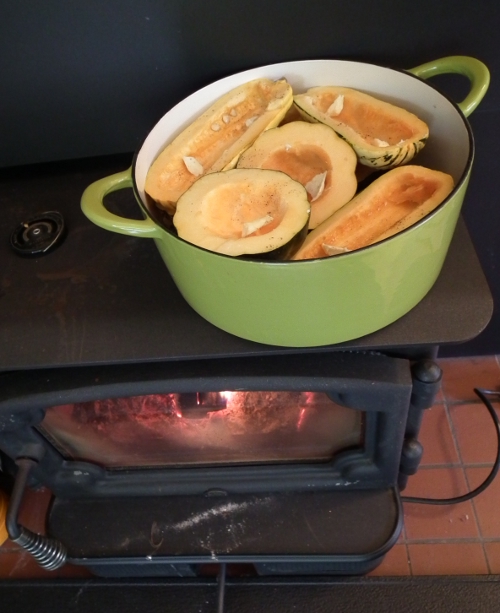