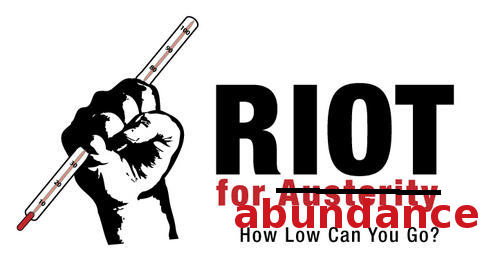 This is the Riot for Abundance for the months of October and November 2013, Â for the three of us plus one (we had friends and family in law staying over and all together they count somewhat for one). EdsonÂ fixed the calculator: all go tither to crunch those numbers!

Gasoline. Â Calculated per person. Though I’m still driving a bit more due to an uptick in activism-related trips, we did pretty well.

Electricity. This is reckoned per household, not per person. We cook on an electric stove. According to our solar meter, we produced 11848 Â kWh since theÂ system was turned on in August 2011 and 675 Â kWh over the last two months (you can follow our solar harvest liveÂ here). We still owe NSTar nothing, but that’s because we racked up a nice credit. In November we did, however, for the first time since April, consume more than we produced (by 105 kW), as evinced by this crazy informative chart on my bill: 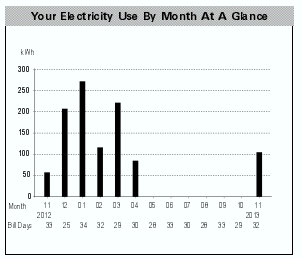 Heating Oil and Warm Water.Â This too is calculated for the entire household. It’s been cold, and though we’ve fired up the wood stove, we’ve also had guests, meaning higher thermostat settings and heating of the annex, where the wood heat doesn’t reach. We’ve probably also used oil to heat up some of the hot water, but it’s not possible to calculate how much of that was heated by ourÂ solar hot water, whichÂ was installed inÂ February. I did get this interesting statistic from SunReports, which monitors our system:

So, all in all, we’ve consumed of heating oil 16.5 gallons, which isn’t bad, considering the prevalent low temperatures.

Water. This is calculated per person. We had lots of people but we used very little water.