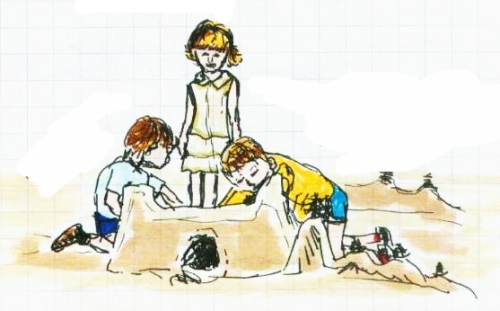 We are asked quite often if we want a second child. It’s a tough question.

As for myself, I always envisioned three: two of our own and one adopted. But I don’t have time on my side: I am already 35, and I don’t think Amie is ready for a younger sibling as yet, let alone an adopted sibling. Financially, having one child has turned out to be a lot more expensive than we thought. And then there are the (new) ecological worries about overpopulation, consumption, and a difficult future.

But mainly I feel that Amie is enough for us, and that we are enough for her (so far). Only kids can be lonely, I know, but we take care to involve her in our own active social life, to let her participate in our adult friendships, and to cultivate her relationship with kids her own age.

And on the other side of “enough” there is also “too much”. My sister and only sibling is two years younger than me. I remember most clearly the turbulence of our adolescent relationship, but there are earlier memories that rankle: of being manipulated, of having to be the one to fight the battles.

The most prohibitive, however, is a much older “memory cloud” of abandonment. Perhaps I shouldn’t write “abandonment”: that’s too discrete a concept, perhaps an after-the-fact rationalization. Rather, it’s a complex and almost visceral feeling of confusion, fear, sadness and loneliness.

I used to think it was a false memory, a later romantization of my plight as “the oldest one”. But seeing Amie now and imagining introducing her to her little sister or brother, ties a knot in my stomach that I seem to know too well. And don’t wish upon her.

Yesterday, in the sandbox, Amie ignored all the kids her age and younger. She’s a very-parallel-play-er. The kids at daycare will run to the door to greet her when she arrives, but she never pays them any notice. In the sandbox, when approached by another child, she was wary, especially as she was “collecting scoops,” of which she relinquished one only when I asked her to share.

Then an older boy came along. He was older as in 9 years, to her 22 months. He ignored her, but she suddenly took notice in the most striking way. As he walked by her, she held out a scoop to him and eagerly said:

He didn’t notice and she stood there, a bit frazzled. And as she recovered, it hit me: Amie would actually love a sibling, but an older sibling!

Wouldn’t that be neat? The older kid could be 8 or 9 and already at home in the world and in our family (so adopting an 8-year-old wouldn’t quite count). If she was a girl, she would love a little Amie to play with, help take care of her, and show her off to her girlfriends. If he was a boy, he would manage quite well to ignore her most of the time, and extend gracious big-brother benevolence when it matters. Amie could look up at her/him, and he/she would totally understand her dependence and high maintenance…

Has anyone figured out how to do this yet?