I was leafing through an old National Geographic compilation book called As We Live and Breathe, The Challenge of Our Environment, when I chanced upon a two-page spread devoted to the Huckleby family and a large photograph that took my breath away. I reproduce it here, not knowing who the photographer or copyright holder is. {UPDATE:Â James P. BlairÂ is the photographer – he commented on this entry. Thank you, James!} 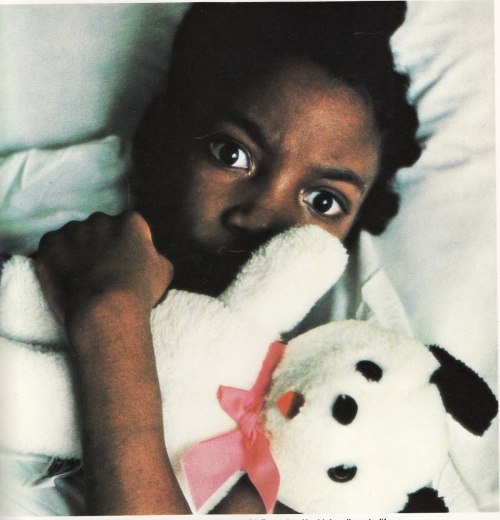 In 1969, in Alamogordo, New Mexico, her family sat down to a meal of pork from a hog they had raised themselves. A year earlier, the pig had been fed grains that were not meant for consumption (animal or human), but only for planting more grains. They had been treated with the pesticide Panogen, whichÂ contained methyl mercury.

Though all the family members showed high doses of mercury in their bodies, only three of the childen were severely affected. There is conflicting information on the web. The most repeated story is that “one wasÂ deafened, another was blinded, a third arrived at the hospital raving mad.” The photographs in the National Geographic book paint a more complex picture: a young woman (Dorothy Jean Huckleby) learning to walk with crutches, and a teenager (Amos Charles), blind butÂ learning to speak again. Of the little girl, whose age I can’t ascertain, the book says “Blinded, mute, her hearing and powers of movement severely impaired, Ernestine Huckleby clings to life”.Â Â There also seems to have been a baby still in uteroÂ when her mother ate the pork, and she was born with a severely damaged central nervous system.

Back in 1970, when the story made national headlines, it forced the U.S. Department of Agriculture (USDA) to ban and recall all mercury-containing pesticides.Â Â Today “the Huckleby Poisoning” still stands as one of the icons for the innocents who are harmed by environmental destruction in the interest of commercial gain and under the “watchful” eye of the government.

But Ernestine, she is forgotten.

When youÂ Google “Ernestine Huckleby”, you get one irrelevantÂ search result. The web, where everyone lives nowadays, does not acknowledge her.

This iconization is a good thing: such images stick in our minds and move our hearts like no theory, accumulation of scientific data or political manifesto can. They make us think, feel,Â speak out. But does it have to come at such a price?

The world snapped a picture. The face became an icon. It discarded the little girl behind it, behind those eyes.

Tonight I will dreamÂ of Ernestine, dancing andÂ skipping, singing and laughing. Then I will dream about the world slamming shut on her. Is she still there, in that little girl clutching the stuffed animal with the pink bow? It is terrible to admit it: I hope not. I hope Ernestine too forgot herself. The alternative is simply too horrific.