We had another snowstorm today. Preschool was closed. Amie and I sat ,in our PJs, at her table and decided to draw something. She chose her favorite book of animals, an older edition of the Visual Encyclopedia of Animals (DK). I think she likes this book because it is small, but thick and compact with stiff and shiny paper, and it looks like “a grownup book”. 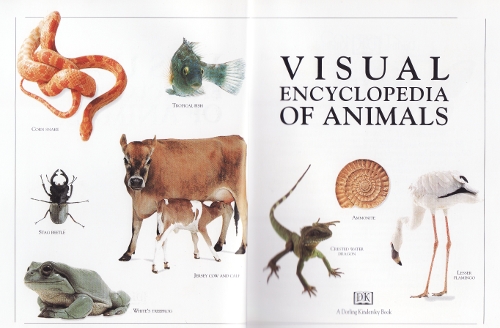 She opened the book to the first page and I suggested she draw the beetle, since it was the simplest. Declining to take this opportunity to read some in my own book, I decided to make it into another seeing lesson. I thought the fact that she would copy from a book was interesting. It is after all something she will be doing often and another good way to learn seeing and drawing. 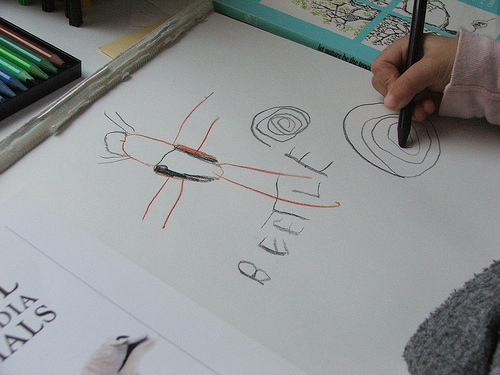 It took quite a bit of talking by me and concentrating on her part to get the beetle down on paper. I could see she was struggling with certain preconceptions of how she should draw such a thing (round body, head attached, four legs) and what it actually looked like in the book. Then we parsed the sounds in BEETLE and for a moment I thought of letting her write it like she heard it: BEETUL or BEETOL. But then I pointed out how it was written in the book, and could she copy that, because that’s how it is really spelled? She found that quite interesting.

The ammonite was her second choice and easier. She is quite confidentÂ  drawing spirals. She liked it so much she added a bigger one and called the first the baby and the second the Mama ammonite. She spelled out AMMONITE, from the book, and I wrote it down, and then we discussed whether to add a S, because there were two of them. 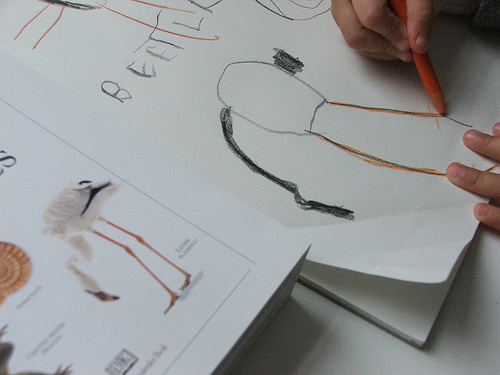 The flamingo was the most interesting shape. Again she battled the urge to reproduce the traditional preconception of what a bird looks like. So together we described the shapes, in detail. How the flamingo has such long legs and a long neck, and a large beak. And how this one was turned away a bit. And where was its eye? I really like how the flamingo turned out! I think she captured its shape very well. She also enjoyed copying FLAMINGO as we parsed the sounds. There’s a B there because she was going to write BIRD first, but then she changed her mind and took on the challenge of the larger word.

Then she water colored all them and this is the result: 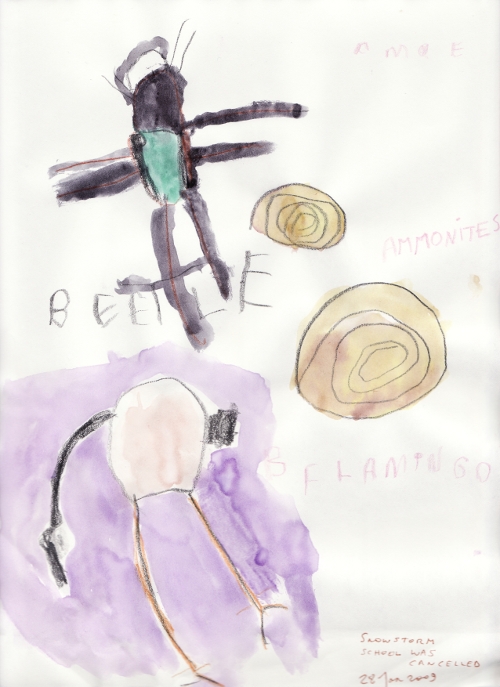 I also instituted what I hope will be a tradition: beside the date we’ll also add some details about the day. I asked her: “What is so special about this day so far?” “Snow storm!” she said, and “School is canceled.” Duly noted.